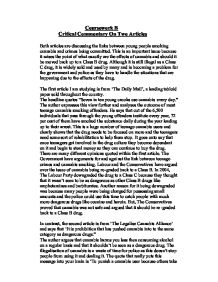 Coursework B Critical Commentary On Two Articles Both articles are discussing the links between young people smoking cannabis and crimes being committed. This is an important issue because it raises the point of what exactly are the effects of cannabis and should it be moved back up to a Class B drug. Although it is still illegal as a Class C drug, it is widely sold and used by many and is becoming a problem for the government and police as they have to handle the situations that are happening due to the effects of the drug. The first article I am studying is from 'The Daily Mail', a leading tabloid paper sold throughout the country. The headline quotes "Seven in ten young crooks use cannabis every day." The author expresses this view further and analyses the outcome of most teenage cannabis smoking offenders. He says that out of the 6,500 individuals that pass through the young offenders institute every year, 72 per cent of them have smoked the substance daily during the year leading up to their arrest. ...read more.

Another reason for it being downgraded was because many people were being charged for possessing small amounts and the police could use this time to catch people with much more dangerous drugs like cocaine and heroin. But, The Conservatives proved that cannabis was not safe and argued that it should be re-graded back to a Class B drug. In contrast, the second article is from 'The Legalise Cannabis Alliance' and says that 'It is prohibition that has pushed cannabis into to the same category as dangerous drugs." The author argues that cannabis harms you less then consuming alcohol on a regular basis and that it shouldn't be seen as a dangerous drug. The illegalisation of cannabis is a waste of time for police as this doesn't stop people from using it and dealing it. The quote that really puts this message into your brain is 'To punish a cannabis user because others take heroin is like punishing a child who uses a water pistol because others later, in acts of robbery, use guns.' ...read more.

If cannabis was legalised then it could be sold in shops along with tobacco and it would reduce teenagers from getting it because of the better quality safety and security over the drug. Some people may disagree with me about this issue because it will then mean cannabis could be sold to adults legally and this would increase the rate of cannabis users, but I believe that stopping teenagers from getting it is more important and will have a bigger effect. This issue is very important and needs to be tackled by the government in the right way. If it is not solved soon then this link between cannabis and teenage crime could become more true, as the criminals will still be smoking their regular daily amount. I think that a huge rehabilitation program should come into force to help teenagers stop using the drug and also to make them more aware of the physical and mental effects of the drug. I believe that this would be very successful and could decrease that number of teenage criminals smoking cannabis every day very dramatically. ...read more.