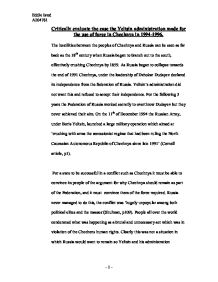 Critically evaluate the case the Yeltsin administration made for the use of force in Chechnyain 1994-1996.

Critically evaluate the case the Yeltsin administration made for the use of force in Chechnya in 1994-1996. The hostilities between the peoples of Chechnya and Russia can be seen as far back as the 18th century when Russia began to branch out to the south, effectively crushing Chechnya by 1859. As Russia began to collapse towards the end of 1991 Chechnya, under the leadership of Dzhokar Dudayev declared its independence from the federation of Russia. Yeltsin's administration did not want this and refused to accept their independence. For the following 3 years the Federation of Russia worked secretly to overthrow Dudayev but they never achieved their aim. On the 11th of December 1994 the Russian Army, under Boris Yeltsin, launched a large military operation which aimed at 'crushing with arms the secessionist regime that had been ruling the North Caucasian Autonomous Republic of Chechnya since late 1991' (Cornell article, p1). For a state to be successful in a conflict such as Chechnya it must be able to convince its people of the argument for why Chechnya should remain as part of the Federation, and it must convince them of the force required. Russia never managed to do this, the conflict was 'hugely unpopular among both political elites and the masses'(Shulman, p109). People all over the world condemned what was happening as a brutal and unnecessary act which was in violation of the Chechens human rights. ...read more.

Yeltsin spoke of this in his television address in December 1994, arguing all the troops sent and the force used were all necessary to halt any threat to the unity of Russia and to ensure her territorial integrity. Just as in 1991 Russia still did not want Chechen independence, as it may lead to more states wanting to leave. The Russian administration never mentioned any thought of a compromise to ease the Chechen problem and saw only a military method as a solution to the problem, claiming the Chechen leaders did not want a political solution. Clearly the Yeltsin administration did provide a case for why it invaded Chechnya, for instance just after the conflict Kozyrev simply stated 'if there is no disarmament in Chechnya, the Russian state will be forced to use as much force as the imposition of order demands'(Shulman, p118). Even the main goal of the conflict was still wanted, most political elites didn't want Chechen separatism and voted in favor of it remaining a part of the Federation. This was not however enough to convince Russia or the world of the necessity for the level of force used. As soon as Russia invaded swarms of media arrived to criticize every action. Because of the world could see all the details of the huge scale of Russia's military operation, even if most were convinced Russia's goal was a fair one she would fail to convince people of the means. ...read more.

'A close adviser to Yeltsin, on his policy towards Chechnya suggests that a treaty based solution could not be reached in 1991-94 because the conflict became a highly personalized battle of egos between Dudayev and Yeltsin' (White et al, p138). The rest of the world witness a sort of 'ethnic hatred' (Lieven, p76), where only the Chechens appeared to be suffering. The unwanted media attention and criticism highlighted this, firmly on the Chechen side, condemned the rash and forceful invasion by Russia. The case put for ward by the Yeltsin administration did have the basis and main points that any ruling state would claim to put down an illegitimate separatist revolt, it even managed to convince people that the goal of Chechnya remaining part of Russia was a desirable one. The Yeltsin administration however, used unnecessary force violating human rights and could never justify this. Because of the spotlight placed on the conflict by media the whole world saw what was happening and did not accept Yeltsins case. The war was and abject failure, Chechnya was not re-incorporated. Russia began looking like a bully and finished up looking militarily weak, the much more militarily superior country had not beaten the tiny country of Chechnya, who had held them off despite having very little of everything. Finally it caused the opposite of Russia's aim Chechnya achieved a 'de facto' independence (Shulman, p109). Clearly the Yeltsin administrations case for force on Chechnya was unsubstantiated and therefore failed. ...read more.