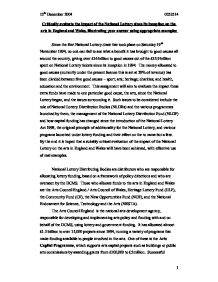 Critically evaluate the impact of the National Lottery since its inception on the arts in England and Wales, illustrating your answer using appropriate examples.

Three examples will be looked at, namely the Angel Of The North, The Lowry, and the Northern Quarter, all in Manchester. The Angel of the North, Gateshead Gateshead Council received �584,000 to construct the controversial 20-metre-high sculpture with a 54-metre wingspan, by artist Antony Gormley. It has had a huge impact on the arts community in the North-West as the immense popularity of the sculpture has encouraged further investment in projects in the area and has helped attract additional direct private sector investment in the arts. The status of the area of Gateshead has also been significantly raised, with the Angel of the North putting the town on the map. It has helped change the areas image as perceived by tourists, and has even claimed to have as much local identity to Gateshead as the Statue of Liberty has to New York. (Arts Council England - National Lottery Projects, 2004, http://www.artscouncil.org.uk/aboutus/ projects_for_subject.php?sid=13 ) The Lowry, Salford Since opening in April 2002, the Lowry (consisting of two theatres, exhibition galleries, shops, cafes, restaurants and conference facilities) has been a catalyst for regeneration in the former dock area of Salford, proving to be one of the most successful projects of its kind in Europe. Receiving a total of �75million of lottery funding, it has achieved its objectives of bringing international quality arts and entertainments to the local residents as well as people all over the North-West and the UK, even abroad. By constructing the Imperial War Museum and shopping centre, the Salford Council has created a state of the art leisure experience in an area that had been derelict for almost 20 years. This has provided a immense effect on employment opportunities for the area, as well as other social and economical benefits, for example increased consumer activity in the Manchester area and the development of luxury apartments around the Quays, giving the area a higher prestige. ...read more.

premises for the art...we need to create more distance between the Arts Council and the people who produce the arts; otherwise we will get dull art." (cited in Moss, 2004) The impact the National Lottery has had on the Arts in England and Wales can best be seen by looking at actual examples, rather than annual reports, sceptical criticisms and published figures. The four lottery funded project focused on previsouly are perfect examples of how the National Lottery has positively benefited the communities, the tourism, the employment opportunities and national perception of areas. The one worry however that is lingering on everybodies mind, is the question of the future. It is no secret that the lottery sales are decreasing, and despite promising new re-branding strategies and new games to entice us into buying tickets, many are doubtful that this is going to have any major effect. Once the new Gambling Bill is passed and the eight new super casinos planned for the UK are up and running, people used to buying lottery tickets may well cease purchasing them in favour of spending their money in these new casinos where the chances of payouts are much higher. This obviously is only relevant to the people who buy tickets soley for the chance of winning, and not for the thought of helping good causes around the UK. Also with London's Olympic bid for 2012 looming, the other good causes, including the arts, are bound to suffer a cut back in funding in order that the bid has a chance of being successful. No doubt when the National Lottery Licence expires in 2008 and other companies bid for it, there may well be another shake up, and more promises will be made by the successful bidder. In the mean time, the arts in England and Wales are certain to benefit from the National Lottery, alongside other good causes, and one can only hope that this benefit will continue for as many years in the future as possible. ...read more.