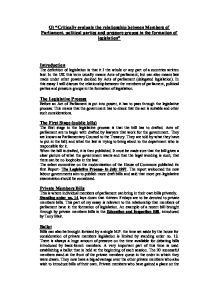 &quot;Critically evaluate the relationship between Members of Parliament, political parties and pressure groups in the formation of legislation&quot;

Q) "Critically evaluate the relationship between Members of Parliament, political parties and pressure groups in the formation of legislation" Introduction The definition of legislation is that it I the whole or any part of a countries written law. In the UK this term usually means Acts of parliament, but can also means law made under other powers decided by Acts of parliament (delegated legislation). In this essay I will discuss the relationship between the members of parliament, political parties and pressure groups in the formation of legislation. The Legislative Process Before an Act of Parliament is put into power, it has to pass through the legislative process. This means that the government has to check that the act is suitable and other such considerations. The First Stage (public bills) The first stage in the legislative process is that the bill has to drafted. Acts of parliament are to begin with drafted by lawyers that work for the government. They are known as Parliamentary Counsel to the Treasury. They are told by what they have to put in the bill, and what the law is trying to bring about to the department who is responsible for it. When the bill is drafted, it is then published. It must be made sure that the bill gives a clear picture of what the government wants and that the legal wording is such, that there can be no loopholes in the law. ...read more.

Each time that the bill is re-printed it is given a new number. There is normally no debating on the bill, but a vote will take place either a verbal one, where each member says 'aye' or 'no', or a formal one where they are asked to leave the chamber and walk back in through one of two doors, one saying yes to the bill and one saying no. Second Reading in the House of Commons (public bills) This in when the main debate takes place. This is the time when the house considers the principle and main points of the bill. The second reading is the first stage where the government bill can be defeated. The house votes in the same way as the first reading. Committee Stage (public bills) After the second reading the bill is moved into the committee stage. This is usually taken part in a standing committee. A standing committee has about 18 members and reflects the party composition of the house. At least one minister from the government department that is in charge of the bill will be on the committee. Members nominated on the committee will normally have special knowledge of the particular area that the bill is dealing with. The committee will examine each clause and direction of the bill, agreeing on parts of the bill that need to be taken out. New clauses may also be added. ...read more.

when a popular pressure group proposes a new legislation. Political Parties A political party is a group of people who have the same view of what laws should be and how the country should be run. An example of a political party would be the labour party, who are in power at the moment. When a new government gets together a political party they will have a report called a manifesto that states all of the reforms that they want to carry out if elected. They firstly go to parliamentary session where they announce these ideas. Political parties rely a great deal on media coverage during their campaign. They announce to the public what they propose to do if elected. But to create these legislations they need to be elected. I think that political parties have a great deal of influence over the formation because they, to use a crude term, have bully boy techniques. They can promise the public new laws and the opposition, possibly wanting to keep up, changes the law before them. This means that they may get their own way without even being elected. Conclusion. In conclusion I would say that there are many different factors in the making and passing of legislation. All of these different groups influence it; it is not just a one way system. Though I think that this is good because it allows everybody to get there own views across and to try and change a law they may find oppressive. ...read more.