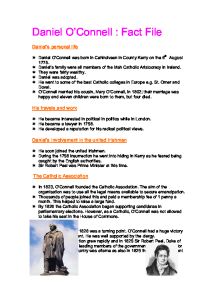 Daniel O'Connell : Fact File Daniel's personal life * Daniel O'Connell was born in Cahirciveen in County Kerry on the 6th August 1775. * Daniel's family were all members of the Irish Catholic Aristocracy in Ireland. * They were fairly wealthy. * Daniel was adopted. * He went to some of the best Catholic colleges in Europe e.g. St. Omer and Dovai. * O'Connell married his cousin, Mary O'Connell, in 1802; their marriage was happy and eleven children were born to them, but four died. His travels and work * He became interested in political in politics while in London. * He became a lawyer in 1798. * He developed a reputation for his radical political views. ...read more.

* By 1826 the Catholic Association began supporting candidates in parliamentary elections. However, as a Catholic, O'Connell was not allowed to take his seat in the House of Commons. * The Clare election in 1828 was a turning point. O'Connell had a huge victory against the government. He was well supported by the clergy. * The Catholic Association grew rapidly and in 1829 Sir Robert Peel, Duke of Wellington and other leading members of the government began arguing for reform. The whole country was aflame as also in 1829 the British Parliament passed the Roman Catholic Relief Act, which granted Catholic Emancipation. However, despite Daniel O'Connell forming the Repeal Association, the Act of Union remained in place. * The fee was then raised to 10 pounds which excluded the forty-shilling freeholders. ...read more.

O'Connell's Repeal Association * On the 1st January 1843, O'Connell pledged that he would achieve repeal before the end of the year. Once again O'Connell suggested that if Parliament did not take action it faced the possibility of civil war. However, very few MPs in the House of Commons supported the repeal of the Union and therefore O'Connell was not in a strong negotiating position. So his challenge was not successful. * O'Connell now came under attack from the Young Ireland movement and leading members began describing his tactics as ineffective. His last days * O'Connell was now a sick man and in March 1847 he decided on a pilgrimage to Rome. He died on his journey in Genoa on 15th May, 1847. As requested, O'Connell's heart was buried in Rome and his body in Dublin. By Eimhe�r Meehan 10c ...read more.