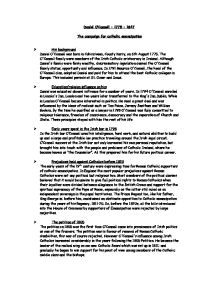 Daniel O'Connell - 1775 - 1847 The campaign for catholic emancipation > His background Daniel O'Connell was born in Cahirciveen, County Kerry, on 6th August 1775. The O'Connell family were members of the Irish Catholic aristocracy in Ireland. Although Daniel's family were fairly wealthy, discriminatory legislation denied the O'Connell family status, opportunity and influence. In 1791 Maurice O'Connell, the head of the O'Connell clan, adopted Daniel and paid for him to attend the best Catholic colleges in Europe. This included periods at St. Omer and Douai. > Education/religion influence on him Daniel was educated aboard in France for a number of years. In 1794 O'Connell enrolled in Lincoln's Inn, London and two years later transferred to the King's Inn, Dublin. While in London O'Connell became interested in politics. He read a great deal and was influenced by the ideas of radicals such as Tom Paine, Jeremy Bentham and William Godwin. By the time he qualified as a lawyer in 1798 O'Connell was fully committed to religious tolerance, freedom of conscience, democracy and the separation of Church and State. These principles stayed with him the rest of his life > Early years spent in the Irish bar in 1798 In the Irish bar O'Connell used his intelligence, hard work, and natural abilities to build up and a large and profitable law practice travelling around the Irish legal circuit. ...read more.

An important and effective part of the Association's work was the organisation of great, open-air public meetings which were often addressed by O'Connell himself. He proved to be an outstanding public speaker. O'Connell's background and his work as a lawyer meant that he knew his audiences. His magnificent voice and his clear, simple conversational style of oratory enabled him to build up a marvellous rapport with the Catholic masses. For the peasantry particularly, O'Connell seemed the incarnation of their hopes and ambitions, not only in a material but in an almost religious sense. He became known as 'the Deliverer'. In turn, the peasant traditions of secret societies and local agitation helped to reinforce the work of the Association at grassroots level. Apart from its innovative ways of raising money, its organisational work and its great public meetings, the Catholic Association also used the press and even public posters to build up support. In many ways, therefore, the Association was a sophisticated political organisation: 'a pioneer ... of mass constitutional politics and pacific popular democracy', The rapid progress of the Association and O'Connell's often bellicose language at public meetings, alarmed the authorities; and he was arrested in 1824 on a charge of incitement to rebellion; though the prosecution failed. ...read more.

On the other hand, in a gesture of political spite, the franchise qualification in Ireland was raised from a forty-shilling freehold to a ten-pound household suffrage, , and this cut the Irish electorate to one-sixth of its former size. Due to the bill there were many opportunities opened up by the Emancipation Act for Catholic advancement in politics, the professions and government service, and peel believed that this was bound to lead to the eventual destruction of the Protestant Ascendancy in Ireland. the achievement of the 1829 Act marks another stage in the identification of Irish nationalism with Catholicism. In Great Britain, however, the Emancipation Act was followed by swift and dramatic changes in politics. It helped to precipitate the break-up of the old Tory Party and the rise of a new Conservative Party; the triumph of the Whigs and their allies at the general election of 1830; and, subsequently, the passage of the Great Reform Act of 1832. These years also saw the emergence of an Irish party in the House of Commons, led by O'Connell, who was able to use his commanding position as leader of a small but significant third party to play off Whigs against Conservatives and thus extract reforms for Ireland. ...read more.