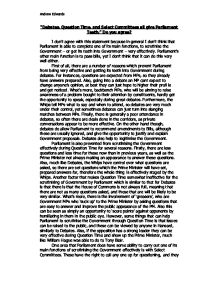 &quot;Debates, Question Time, and Select Committees all give Parliament Teeth.&quot; Do you agree?

"Debates, Question Time, and Select Committees all give Parliament Teeth." Do you agree? I don't agree with this statement because in general I don't think that Parliament is able to complete one of its main functions, to scrutinise the Government - or get its teeth into Government - very effectively. Parliament's other main function is to pass bills, yet I don't think that it can do this very well either. First of all, there are a number of reasons which prevent Parliament from being very effective and getting its teeth into Government during debates. For instances, questions are expected from MPs, so they already have answers prepared. Also, going into a debate an MP cant expect to change anyone's opinion, at best they can just hope to higher their profile and get noticed. What's more, backbench MPs, who will be aiming to raise awareness of a problem bought to their attention by constituents, hardly get the opportunity to speak, especially during great debates. Furthermore, the Whips tell MPs what to say and when to attend, so debates are very much under their control, yet sometimes debates can just turn into slanging matches between MPs. Finally, there is generally a poor attendance in debates, so often there are deals done in the corridors, as private conversations appear to be more effective. ...read more.

These have the right to call any one up for questioning, and they will be asked to give evidence and answer questions, much like in a court. This gives Parliament the opportunity to scrutinise by questioning Government's decisions, as they have the right to ask whatever they want to, they have "Parliamentary Privilege". Also Government Whips, Ministers, and the Opposition Front Benchers aren't allowed to be part of a Select Committee, which means there is less control over what is said by committee members. Furthermore, although committees are made up in proportion to the representation of Parties in the House of Commons, meaning that there is a majority of Government MPs here, they feel that it is there responsibility and duty as a member of a Select Committee to hold the Government accountable and scrutinise them to the best of their ability. What's more, people who are called up to be questioned by a select committee are expected to tell the truth and bring any required documents, so that the committees always get the evidence that they need. However, despite this power that the select committees may have, much of it is in vein, as although any MP has the right to apply to join a Select Committee and influence which one they would like to join, ...read more.

There are also factors that undermine Parliament that reduce its ability to scrutinise Government, for example Special Interest Groups, who get listened to more than the electorate. Also, the media has a huge influence on both Policies and the reputation of Parliament, which can often prevent Parliament from getting on with its job. What's more, Party Politics dominate Parliament, as MPs are generally more concerned with supporting their Party than with supporting Parliament. Finally, Europe has a strong influence over what goes on in Parliament, and the Executive has a great amount of power. In conclusion, despite some opportunities for Parliament to carry out arguably its main job, to scrutinise the Government, effectively, these are often ignored by the Government or undermined by outside influences, meaning that the Government has a huge amount of power that Parliament can do almost nothing about. As one Parliamentary commentator, Brick, showed through a famous cartoon, Parliament is just a big theatre performance that is staged by the Whips, but is generally of no interest to the electorate. Another Parliamentary commentator, Wright, said that it was nobody's job, not even Parliament's, to scrutinise the Government, but that there is merely a never-ending election campaign between Government and the Opposition. Therefore, in my opinion, I disagree with the statement, as I believe that Debates, Question Time, nor Select Committees give Parliament Teeth with which they can get into Government. Andrew Edwards ...read more.