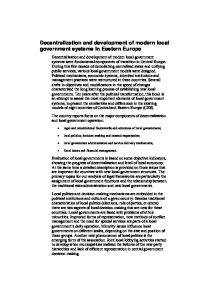 For instance, a neutral attitude is needed to manage grant systems; the same conditions must be guaranteed to providers regardless of sector. This attitude is most developed in Slovenia, where specific laws regulate basic principles of subsidization, especially regarding social care. In Hungary general rules have been absent for a decade, but the financial elements for the main social service acts exist. Conversely, in Slovakia district offices as arms-length agencies manage primary schools, which have the right to participate in decision-making concerning the allocation of subsidies. Many of these rights are applicable to nonstate schools as well. In other cases district offices are prohibited from influencing schools. What is particular to this country example is that state functions refer equally to providers whether they are private or state-owned. The adoption of such an attitude is increasing, which is necessary to encourage competition among providers and sectors in-virtual-market circumstances. This type of phenomenon is apparent in Hungary in primary health care, in many countries in establishing systems of social service providers, and in Slovenia in creating rules of concessions in this sphere. All in all, major reform in the social sectors has not been implemented; rather, competition has emerged in limited fields of service delivery. However, its emergence is quite important in itself to ensure future development. Elements of market orientation are emphasized in all of the concepts of restructuring and reforms, but their realization thus far is limited. 3. Towards European integration Another incentive to development is integration of the region with the European Union. The message of the acquis communautaire in the field of public services again is the guarantee of equal conditions for providers and open competition. This philosophy favors the strengthening of market conditions and transparent subsidization. Policy preferences and the framework of policy orientation are influenced by the expectations accepted by joining countries. The role of regulation in particular has been emphasized. ...read more.

Poland demonstrates a third model, where moderate integration and the creation of middle level government occurred simultaneously In summary, the characteristic differences are mainly in structure and less in the models chosen. They are quite fluid at this stage of development. The transition is yet in progress, but the fields of alternatives have been drawn up quite clearly. The next step in selecting among these alternatives will have great impact on the final The most important element of public administration reform is the creation of entities for local governance (Bennett 1998: 40). This entails the reestablishment of basic legal and managerial units. In the situation of tabula rasa, the decision to choose among the basic models of such organization was relatively independent. As table 1.4 shows, the choices made in each country were very different. Some accepted the principle that local government was linked more or less to settlement structure following geographical boundaries, as exemplified by the Czech Republic, Slovakia and Hungary. These systems are nonintegrated, referring to the fact that a relatively large number of municipalities exist without any administrative amalgamation. Integrated systems operate in Lithuania, Slovenia and Poland, meaning that the framework of local government units is adjusted to comprise larger proportions of the population irrespective of the geographical boundaries of settlements. In West European countries (Council of Europe 1994) that have adopted integrated systems, less than five percent of the number of municipalities have less than one thousand inhabitants; thus, of the country group investigated here, Lithuania, Estonia, Slovenia and Poland fall into this category due to their similarly low percentages. In nonintegrated systems more than twenty percent of municipalities have less than one thousand inhabitants, which is a characteristic of the Czech Republic, Slovakia, Hungary and Latvia. It would be easy to categorize countries according to their actual territorial division; however, it is necessary to highlight their systems from a historical aspect. Table 1.4 shows the temporary status of structures at the end of the 1990s. The importance of this classification must not be exaggerated; these systems in transition are changing quite rapidly. frameworks of these local government systems. ...read more.