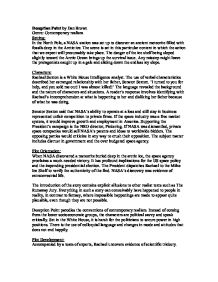 Deception Point by Dan Brown Genre: Contemporary realism Setting: In the North Pole, a NASA station was set up to discover an ancient meteorite filled with fossils deep in the Arctic ice. The scene is set in this particular context in which the action that we expect will presumably take place. The danger of the ice shelf being sloped slightly toward the Arctic Ocean brings up the survival issue. Any misstep might leave the protagonists caught up in a gale and sliding down the endless icy slope. Characters: Rachael Sexton is a White House Intelligence analyst. The use of verbal characteristics described her estranged relationship with her father, Senator Sexton. 'I turned to you for help, and you sold me out! I was almost killed!' The language revealed the background and the nature of characters and situations. A reader's response involves identifying with Rachael's incomprehension at what is happening to her and disliking her father because of what he was doing. Senator Sexton said that NASA's ability to operate at a loss and still stay in business represented unfair competition to private firms. If the space industry was a free market system, it would improve growth and employment in America. ...read more.

Meanwhile, the discovery of life from outer space had crippled Sexton's campaign. Rising Tension: Rachael was trapped in a sinking sub while Tolland became vulnerable to the soldier's attacks. It turned out to be Pickering who created the meteorite deception to help save NASA. His actions in killing them were shocking, and significantly alter our perception of his character. 'You faked the meteorite and killed innocent people?' The sudden intrusion of an unexpected dialog makes us reassess the narrative's focus. 'Pickering had to see the importance of this discovery. He had to forgive certain choices made in desperation.' Perhaps he is not merely the innocent character he first appeared to be. Apparently trapped, Rachael had no one to turn to but her father. She faxed him evidence of the meteorite being placed under the ice in the hopes that she could be rescued in return. Unfortunately for Rachael, Sexton was prepared to risk his daughter's life in order to be first to announce the NASA fraud. His attitudes had changed to ego. Climax: As soon as they were rescued onboard a helicopter, the megaplume had reached the surface of the sea. Pickering was still on the ship when it was being sucked down into the spiraling water. ...read more.

We should build up a trustworthy government. The text reveals America's current assumption about space exploration. The White House had always vetoed the Space Commercialization Promotions Act and private sectors are taking its toll. There are petitions from space hotels and tourist attractions whose proposed operations include ejecting their trash into the void of space and creating orbiting trash heaps. There is the proposal of launching the deceased into orbit, causing our telecommunication satellites to collide with dead bodies. It is an abominable idea and the White House is the only barrier against privatization and anarchy in space. Throughout history, NASA's pioneers had attempted the impossible, accept failure, and then 'go back to the drawing board' while the rest of us stand back and criticize. The author's ideology is that we should truly comprehend NASA's academic benefits to the country and not misuse it as a commercial promotion. Context To read in intertextual conjunction with other Brown novels dealing with the same theme, Deception Point helps to understand the sophistication of politics in Washington; it visualizes our view of American leadership; which involves deception and counterattacks to gain power, the effect of which, in the wake of America's scientific discoveries and brilliant deceptions, is an event that is likely to happen in the modern world. As an American critic put it, the novel is 'A big yet believable story with convincing settings that mediates the political arena.' ...read more.