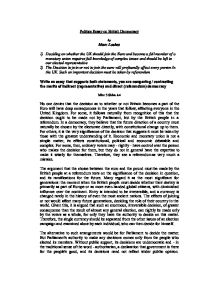 Politics Essay on British Democracy by Marc Loakes 1) Deciding on whether the UK should join the Euro and become a full member of a monetary union requires full knowledge of complex issues and should be left to our elected representative 2) The Decision to join or not to join the euro will profoundly affect every person In the UK. Such an important decision must be taken by referendum Write an essay that supports both statements, you are comparing / contrasting the merits of indirect (representative) and direct (referendum) democracy Min: 3 Sides A4 No one denies that the decision as to whether or not Britain becomes a part of the Euro will have deep consequences in the years that follow, affecting everyone in the United Kingdom. For some, it follows naturally from recognition of this that the decision ought to be made not by Parliament, but by the British people in a referendum. In a democracy, they believe that the future direction of a country must naturally be chosen by the electorate directly, with constitutional change up to them. For others, it is the very significance of the decision that suggests it must be taken by those with the greatest understanding of it. Economic and monetary union is not a simple matter, its effects constitutional, political and economic debatable and complex. For some, then, ordinary voters may - rightly - have control over the person who makes the decision for them, but they do not in general have the expertise to make it wisely for themselves. ...read more.

To suggest, therefore, that when such people make a decision it is anything other than entirely democratic, is contrary to all that being an elected representative is about. A further argument in favour of a referendum can be made based on the contrast between the authority of a referendum as against the authority of a temporary parliamentary majority. The first, and last, nationwide referendum, settled the issue in question in a way that parliamentary decisions alone could not. By allowing British people to decide whether or not to stay a member of the European Common Market, the government of the time ensured greater authority for those who supported membership, and a weakened case for their opponents. Every election returns a different parliaments, and each one has as much authority as any other, with the right to overturn any acts and decisions made by previous parliaments. A referendum is different because it shows the public will in a starker way - not in terms of a selection of representatives, but directly. Therefore, while one parliament's decisions can be disputed by the next, a decision made at a referendum is usually accepted by both sides for some time to come. According to this view, a "Yes" vote in a referendum would give much greater legitimacy than any parliamentary division, ensuring as much authority for pro-Europeans over this matter as they gained in 1975 in the Common Market referendum. On the other hand, a "No" vote in a referendum would equally have a much greater finality than that of a temporary parliamentary majority, whose members, and so whose views, change every four years or so. ...read more.

If the British people vote for the euro and it is disastrous, they can do little but moan. Equally, if they vote against membership and realise too late how great the benefits would have been, they can do no more than make "if only" statements. But if the decision is made for them by people they choose, then that is a very different matter. They can punish supporters of the euro at the ballot box, or give them huge majorities, depending on how successful membership is. Direct democracy, then, leaves people with no one to pressure, no one to control. Such pressures should be welcomed by good politicians, and the need to be right and to take decisions responsibly gives their positions meaning. Removing this, anti-referendum people can argue, is to undermine the democratic traditions of this country. As none deny the gravity of the decision to be taken on the euro, it is unsurprising that supporters and opponents of a referendum on the issue both take the matter seriously. For supporters, it is a straight-forward matter of trusting the people to make the best decisions for themselves, and making them responsible for their own fate. For opponents, a referendum is a threat to the very concept of direct democracy and parliamentary decision-making, undermining parliamentary sovereignty and putting the complex decisions in the wrong hands. Ultimately, whether one agrees with one side or the other depends on how much wisdom one imparts to the ordinary man or woman in the street, and to the typical MP, and on whether one sees indirect democracy as sufficiently superior to direct democracy that politicians should make even the most important decisions for the public. ...read more.