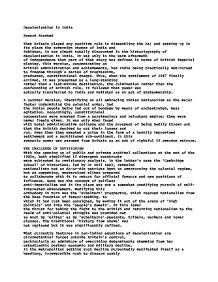 Decolonisation in India Howard Brasted That Britain played any positive role in dismantling the Raj and setting up in its place the sovereign states of India and Pakistan, is now almost totally discounted in the historiography of decolonisation in India. It was only in the warm aftermath of independence that part of that story was defined in terms of British imperial planing. This version, concentrating on British administration and achievements, had India being practically wet-nursed to freedom through a series of progressive, graduated, constitutional stages. Thus, when the settlement of 1947 finally arrived, it was presented as a long-standing rather than a last-minute destination, the culmination rather than the confounding of British rule. It followed that power was actually transferred to India and Pakistan as an act of statesmanship. A counter version, identifying an all embracing Indian nationalism as the major factor undermining the colonial order, had the Indian people being led out of bondage by means of orchestrated, mass agitation. Accordingly, constitutional concessions were wrested from a parsimonious and reluctant empire; they were never freely given. It was only when faced with total administrative collapse and the prospect of being bodily thrown out that the British decided to cut their losses and run. ...read more.

Should indigenous government begin to threaten British interests, the Viceroy's veto might be invoked to protect them. Indeed, no major British statesman in the depression era believed that there would be a full transfer of power within their life-times, let alone the next decade. With a clear itinerary and timetable of de-commission blurred, so by extension was any ideological commitment to the goal of Indian freedom. If the Conservatives, who dominated government in the interwar years, were shown predominantly framing answers to the Indian Question with an eye to keeping British hands firmly on the 'gears' of India, J. A. Gallagher's somewhat cynical theory of 'interpenetration' proceeded to associate the Labour Party with much the same priority. Socialists were just closet Tories, surreptitiously rather than openly committed to shoring up imperial control. Conjuring up the notion that a broad bipartisan agreement was reached about retaining a foothold in India Gallagher proceeded to pass off independence as a 'new technique' designed to contrive this. That Labour's brand of devolution was really imperialism camouflaged, was taken further by Anita Inder Singh who espied in the Attlee government's negotiating strategy a devious bid to secure the 'very survival of Pax Britannica'. With the possible exception of R. ...read more.

AU this amounted to and became widely known at the time as Labour's 'ballot box' principle of 'democratic self-determination'. That Labour was not able fully to supply its method until 20 February 1947 had little to do with any alleged 'interpenetration' with the Tories or other presumed handicaps. It had everything to do with contingencies inspired by the war, the unamenability of Churchill during it and the diversionary tactics of Wavell after it. Proclaiming, despite constant briefings, that he did not know what Labour's itinerary was, the Viceroy persistently departed from to route Labour had long proposed to take; hence his dismissal. Even with such obstacles-Labour still managed to initiate the two most important moves that were made to bring about a settlement prior to the final breakthrough-the Cripps Offer of 1942 and the Cabinet Mission of 1946. Although these failed this had much less to do with ideological insincerity, hidden agendas or lack of commitment to ending the Raj, than with the intractability of communal discord. CONCLUSION To date most of the action has been focused on the Indian side of the field. But can the plays of Indian nationalism and Muslim separatism, important though they were, be fury appraised without reference to the specific initiatives Britain actuary took? Unless due regard is given to that aspect the story of decolonization is left unbalanced and incomplete. ...read more.