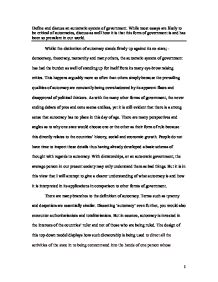 Define and discuss an autocratic system of government - While most essays are likely to be critical of autocracies, discuss as well how it is that this form of government is and has been so prevalent in our world.

Define and discuss an autocratic system of government. While most essays are likely to be critical of autocracies, discuss as well how it is that this form of government is and has been so prevalent in our world. Whilst the distinction of autocracy stands firmly up against its co-stars; -democracy, theocracy, monarchy and many others, the autocratic system of government has had the burden as well of standing up for itself from its many eye-brow raising critics. This happens arguably more so often than others simply because the prevailing qualities of autocracy are constantly being overshadowed by its apparent flaws and disapproval of political thinkers. As with the many other forms of government, the never ending debate of pros and cons seems endless, yet it is still evident that there is a strong sense that autocracy has no place in this day of age. There are many perspectives and angles as to why one state would choose one or the other as their form of rule because this directly relates to the countries' history, social and economic growth. People do not have time to inspect these details thus having already developed a basic schema of thought with regards to autocracy. ...read more.

The benefits of such rule can be seen in many present day Western countries in Europe and North America as they have prospered with maturity in terms of social and economic growth. Although it should be noted that democracy can be interpreted in another way. Even the forefathers of political science, Plato and Aristotle, saw democracy as 'an exploitative form of government, in the sense that the many used their political power to obtain themselves the wealth of the rich - a majority oppressing a minority.'3 To support this claim one would suggest that even from the example of a representative democracy, it is not the people themselves that directly vote on government policies but the elected representatives. The contradiction comes into play when we often find our representatives side with the rest of the majority party, even though that's not what the public wants. From this point of view, it is a drastic shift for a rule which would initially seem to be in the common good for all, at the same time possess the qualities of personal sole interests. One would often find countries in Africa and Asia to be states that have altered their form of government one after the other. ...read more.

Proven that there are autocratic elements in this government, one may also suggest that too much democracy causes instability and gives rise to other problems which are luxuries that Malaysia cannot afford as of yet, as it desperately needs economic progress and basic amenities. In conclusion, the dominance of autocratic governments today and in past history have at least given justice to why it is such a common form of government. The view of dictatorships dishing out bad policies, at least from the point of a democratic value system, Tullock reminds us that, "the normal reason however, is not that they are devoted to those policies on ideological grounds, but that they think that those are the policies that are most likely to permit them to obtain and maintain power."9 As to whether this can be seen as a positive or negative step for the ruling state will depend on the scope of where, when and what kind of circumstances does the country find itself in. Moore reiterates this point by stating that "different perspectives on the same set of events should lead to complementary and congruent interpretations, not to contradictory ones."10 It is in hope that not only we now better understand the different views of how governments rule their states but as well as a clearer understanding of autocracy and its interpretations. ...read more.