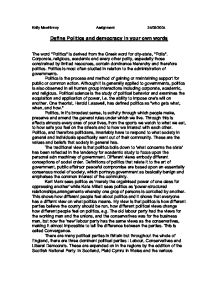 Define Politics and democracy in your own words

Kelly Mawhinney Assignment 25/09/2005 Define Politics and democracy in your own words The word "Politics" is derived from the Greek word for city-state, "Polis". Corporate, religious, academic and every other polity, especially those constrained by limited resources, contain dominance hierarchy and therefore politics. Politics is most often studied in relation to the administration of governments. Politics is the process and method of gaining or maintaining support for public or common action. Although it is generally applied to governments, politics is also observed in all human group interactions including corporate, academic, and religious. Political science is the study of political behavior and examines the acquisition and application of power, i.e. the ability to impose one's will on another. One theorist, Harold Lasswell, has defined politics as "who gets what, when, and how." Politics, in it's broadest sense, is activity through which people make, preserve and amend the general rules under which we live. Through this is affects almosts every area of your lives, from the sports we watch to what we eat, to how safe you feel on the streets and to how we interact with each other. Politics, and therefore politicians, invariably have to respond to what society in general and individuals specifically want out of their community. These are the values and beliefs that society in general has. The traditional view is that politics boils down to 'what concerns the state' has been reflected in the tendency for academic study to focus upon the personal adn machiney of government. ...read more.

The US novelist and Poltical commentator Gore Vidal declared in a 1982 interview: 'Democracy is supposed to give you the illusion of choice, like Painkiller X and Painkiller Y. But they're both just asprin.' This relativity can be placed into two categories, direct and indirect democracy. Direct democracy is based upon direct and continuous particuption regardless of ethncity, gender and religion.The term "pure democracy" is sometimes used as a synonym for "direct democracy," however majority power in a direct democracy may be limited by a constitution, all citizens. Also are allowed to participate in decision making for their favourite policy. i.e. Referdrums. Decisions are made by citizens with represntation (poilticans). Direct democracy strengthens community and solidarity. Also citizens have continous involvement in politcal decisions and doesn't have to wait five years for a general election. Although this is one system there are a few criticisms of it they are, it can only be maintained in small states, this is because it would take to long to make decisions if it was upheld in larger places like the UK (A morden state), it would take months or longer for a decision when you might need one quick. Also people generally have too many distractions, so it be better if professional representatives (politicans) can be trusted to make a better decision than the people as a whole. Indirect democracy is a better policy for the UK, it means citizens elect politicans to make politcal decisions on thier behalf (representative or indirect democracy). ...read more.

This guarantees someone equality before the law and it also ensures that the powers of those in government can be curtailed by laws that are enforceable in courts. This has been further developed by the growth of the impact of the European Court which can act as a 'check and balance' against the governments of member states. Today democracy is very popular idea and one which people of all ideologies (including conservatives, repubilcans, nationalists, marxists and anarchists) all seem to support. The modern and popularly excepted form of democracy is liberal democracy. This form follows the model of indirect democracy with the liberal touch of universal sufferage for both men and women, freedom of the media and elections on routine basis. The Frist World War of 1914-18 was a terrible ordeal for civilization in which millions of people perished. But it's end appeared to be a triumph for democracy. Leading USA into the conflict in 1917, President Woodrow Wilson declared that 'The world must be made safe for democracy', and following the wartime collapse of the German, Austro-Hungarian and Russian empires, defeated Germany became a republic and a cluster of new states appeared in Eastern Europe and the Baltic, all more or less committed to democracy. Direct democracy is the best system is my eyes, this is beacuse it gives everyone a chance to make decisions, but also you can get on with your life without worrying about everyday problems, instend you have a representative doing the main work for you. So I think it is the best system around. ...read more.