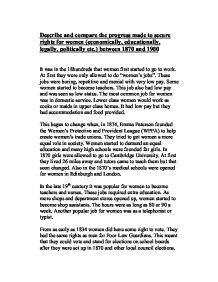 Describe and compare the progress made to secure rights for women (economically, educationally, legally, politically etc.) between 1870 and 1900

Describe and compare the progress made to secure rights for women (economically, educationally, legally, politically etc.) between 1870 and 1900 It was in the 18hundreds that women first started to go to work. At first they were only allowed to do "women's jobs". These jobs were boring, repetitive and menial with very low pay. Some women started to become teachers. This job also had low pay and was seen as low status. The most common job for women was in domestic service. ...read more.

At first they lived 26 miles away and tutors came to teach them but that soon changed. Also in the 1870's medical schools were opened for women in Edinburgh and London. In the late 19th century it was popular for women to become teachers and nurses. These jobs required extra education. As more shops and department stores opened up, women started to become shop assistants. The hours were as long as 80 or 90 a week. Another popular job for women was as a telephonist or typist. ...read more.

In 1897 over 500 committees became united into a national organisation. They were called the National Union of Women's Suffrage Societies. A woman called Millicent Fawcett was their leader. They protested peacefully by handing out pamphlets and sending letters to politicians. Queen Victoria called women having equal voting rights a "mad wicked folly". There were mixed feelings about it. The leaders of the party in power at the time, the Conservatives, approved of the idea but most of their party members didn't. The Liberal leaders, who were the main opposition of the Conservatives at the time, disapproved but most of their party did. There was a small, new party called the Labour party who also approved of the idea. ...read more.