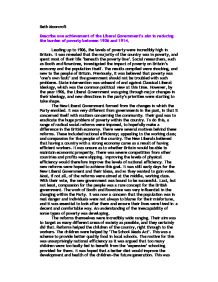 Describe one achievement of the Liberal Government's aim in reducing the burden of poverty between 1906 and 1914.

Beth Moorcroft Describe one achievement of the Liberal Government's aim in reducing the burden of poverty between 1906 and 1914. Leading up to 1906, the levels of poverty were incredibly high in Britain. It was revealed that the majority of the country was in poverty, and spent most of their life 'beneath the poverty line'. Social researchers, such as Booth and Rowntree, investigated the impact of poverty on Britain's economy and the population itself. The results compiled were shocking, and new to the people of Britain. Previously, it was believed that poverty was 'one's own fault' and the government should not be troubled with such problems. State intervention was unheard of and against Classical Liberal ideology, which was the common political view at this time. However, by the year 1906, the Liberal Government was going through major changes in their ideology, and new directions in the party's priorities were starting to take shape. ...read more.

An understanding of the inescapability of some types of poverty was developing. The reforms themselves were incredibly wide ranging. Their aim was to target as many different areas of society as possible, and they certainly did that. Reforms helped the children of the country, right through to the workers. The children were helped by 'The School Meals Act'. This was a scheme to provide better quality food in local schools. The motive for this was unsurprisingly national efficiency as it was argued that too many children were too badly fed to benefit from the 'expensive' schooling provided for them. It was hoped that a better diet would improve the development and health of the children-the future generation. This was however criticised as this act was not compulsory. It was put forward to the local governments, some of which ignored it completely. By 1914, over half had not begun the service. ...read more.

The radical and new changes were like a breath of fresh air to the people of Britain, and were seen as an exciting and hopeful improvement to the standard of living. The wide-range of reforms ensured that many different groups of society were targeted and helped by the government. No minorities were left out. They reform package was a bold, yet beneficial move that the new Liberals made. It was believed to be the forerunner of the Welfare State that exists today, as schemes like this had never been tried or even thought of before. To conclude, I believe that the achievements made by the New Liberal Government were extremely useful in removing the burden of poverty. The improvements were gradual, and some may say 'slow-working', however the determination of the government alone shows the compassion involved in reducing the high levels of poverty within the country. And as for being called the 'forerunner of the welfare state', that alone is a huge achievement. An involved and caring government was sure to produce incredible improvements to the society and economy of Britain. ...read more.