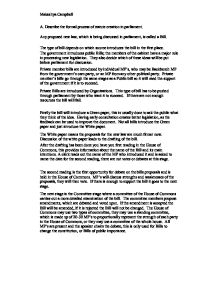 Describe the formal process of statute creation in parliament.

A. Describe the formal process of statute creation in parliament. Any proposed new law, which is being discussed in parliament, is called a Bill. The type of bill depends on which source introduces the bill in the first place. The government introduces public Bills; the members of the cabinet have a major role in processing new legislation. They also decide which of these ideas will be put before parliament for discussion. Private member bills are introduced by individual MP's, who may be Backbench MP from the government's own party, or an MP from any other political party. Private member's bills go through the same stages as a Public bill so it will need the support of the government if it is to succeed. Private Bills are introduced by Organizations. This type of bill has to be pushed through parliament by those who want it to succeed. If there are not enough resources the bill will fail. Firstly the bill will introduce a Green paper, this is usually done to ask the public what they think of the idea. ...read more.

Although there are a lot of stages for the new legislation to go through, this can take a long time to complete. The amount of time spent debating the proposals is limited to 1 day, and 1/2 day for amendments. Several stages of consultation allow several opportunities for people and groups to have an input. This may lead to the final piece of legislation being weaker than intended, because objections raised mean that amendments are made. Points of discussion do not have to be included by making amendments to the Bill, if they are not the Bill may be defeated before it becomes an Act of Parliament, this might lead to pressure to make changes. The Government has a large majority so would expect its own MP's to support its Bills, therefore any objections should not cause a problem in the passage of the Bill. The Government will only struggle to get its own Bills through Parliament if its own MP's do not support it. The Government has a large majority and has a lot of power in Parliament, this means it can push Bills through and create new legislation even if no other MP's from other political parties support it. Makeshya Campbell ...read more.