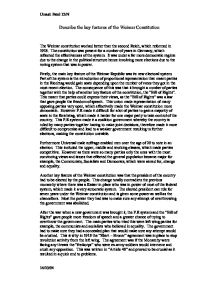 Describe the key features of the Weimar Constitution

Describe the key features of the Weimar Constitution The Weimar constitution worked better than the second Reich, which reformed in 1918. The constitution was present for a number of years in Germany, which reflected the effectiveness of the system. It was under a far more democratic regime due to the change in the political structure hence involving more elections due to the voting system that was in power. Firstly, the main key feature of the Weimar Republic was its new electoral system. Part of the system is the introduction of proportional representation that meant parties in the Riechtag would gain seats depending upon the number of votes they got in the most recent election. ...read more.

Furthermore Universal male suffrage enabled men over the age of 20 to vote in an election. This included the upper, middle and working classes, which made parties competitive. However as there were so many parties only the ones with the most convincing views and issues that effected the general population became major for example, the Communists, Socialists and Democrats, which were aimed for, change and equality. Another key feature of the Weimar constitution was that the president of the country had to be elected by the people. This change totally contradicts the previous monarchy where there was a Kaiser in place who was in power of most of the federal system, which made it a very autocratic system. ...read more.

This was written in "Article 48" and proved to be crucial as it resulted in a quick end to problems. The P.R system was democratic but proved to be a disadvantage to the government as it allowed challenges from the left wing to occur because opposing parties voices were being heard by the German people. An example of these challenges was the "Spartacist Rising" in January 1919 led by Luxemburg and Liebricht inspired by the Russian revolution in 1917. However this revolt effectively crushed by the freikorps killing the leaders to. Further orders by the president crushed any strikes or protests stopping any threat of communism. Although was many threats parties had very little chance of overthrowing the Weimar but may have helped reduce the confidence on the government. ?? ?? ?? ?? Umash Patel 12/N 14/10/04 ...read more.