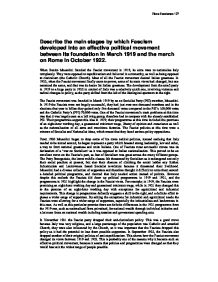 Describe the main stages by which Fascism developed into an effective political movement between its foundation in March 1919 and the march on Rome in October 1922. When Benito Mussolini founded the Fascist movement in 1919, its aims were to nationalise Italy completely. They were opposed to republicanism and believed in a monarchy, as well as being opposed to clericalism (the Catholic Church). Most of all the Fascist movement desired Italian greatness. In 1922, when the Fascist movement finally came to power, some of its main views had changed, but one remained the same, and that was its desire for Italian greatness. The development from the small party in 1919 to a huge party in 1922 in control of Italy was a relatively quick one, involving violence and radical changes in policy, as the party shifted from the left of the ideological spectrum to the right. The Fascist movement was founded in March 1919 by an ex Socialist Party (PSI) member, Mussolini. In 1919 the Fascists were not hugely successful, they had just over one thousand members and in the elections that year in Milan they gained only five thousand votes compared to the PSI's 160,000 votes and the Catholic Party's (PPI) 70,000 votes. One of the Fascist movement's main problems at this time was that it was largely seen as a left wing group, therefore had to compete with the already established PSI. ...read more.

Fascism is said to have developed out of feelings generated by the First World War. There was a lot of bitterness due to what the majority of Italians saw as a mutilated victory. The Fascists used a great deal of violence, especially towards the Socialists, specifically between 1920 and 1922. The violent group within the Fascist party were known as the black shirts, and many people feared them as they used violent methods such as forcing people to drink castor oil, sometimes mixed in a fatal cocktail, which could often result in death. This violence was justified as political action, and although it was not supported by many Italians, and resulted in deaths, very little was done about it, and this was largely due to support of Fascism and a great fear at the threat that they posed. Fascist violence was so successful because many saw it as a necessary solution to the threat of Socialism. One of the most important reasons that the violence was so successful was down to the elite and the agents of the government, including law enforcement groups such as the police, whom were so disgusted with the weakness of the government, were actually prepared to cooperate with the Fascists. Incidents of the authorities standing up to the Fascists bullyboy tactics were rare, which is one of the reasons that the Fascist movement was able to develop so rapidly from 1919 to 1922. ...read more.

One of the main reasons that this occurred so quickly was the use of violence. Many people feared Fascist violence as it was very cruel and some aspects of it were even life threatening. The 'ras' had a lot of control, even after the formation of the National Fascist Party, which would have made Fascist violence successful. The movement came about at the right time. The Liberal government was weak as there were many different parties with seats in parliament, and there was a national fear of Socialist revolution. The Fascists played on the weak areas of Italy to help them gain power. They shifted from the political left to the right, without which it is doubtful that they would have become as successful as they did. They made their policies after 1921 to suit a wide range of people by making some of the policies more non-committal than other parties did, for example they held no specific commitment on political structure except one designed to ensure Italy's historical destiny. The fact that there became a divide in the Fascist movement in August 1921, when Mussolini announced a pact of pacification with the PSI, and both the ras and Mussolini realised that they had to compromise because they needed each other to form a strong movement, shows that politically the movement was strong, because sacrifices had been made in order to form the National Fascist Party. ?? ?? ?? ?? Fiona Henderson 127 ...read more.