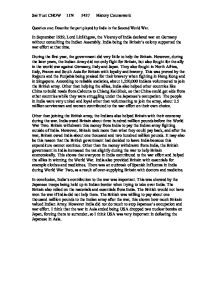 Describe the part played by India in the Second World War.

Question one: Describe the part played by India in the Second World War. In September 1939, Lord Linlithgow, the Viceroy of India declared war on Germany without consulting the Indian Assembly. India being the Britain's colony supported the war effort at that time. During the first year, the government did very little to help the Britain. However, during the later years, the Indian Army did not only fight for Britain, but also fought for the ally in the world war against Germany, Italy and Japan. They also fought in North Africa, Italy, France and South Asia for Britain with loyalty and bravery. This was proved by the Rajputs and the Punjabis being praised for their bravery when fighting in Hong Kong and in Singapore. According to reliable statistics, about 1,250,000 Indians volunteered to join the British army. Other than helping the allies, India also helped other countries like China to build roads from Calcutta to Chiang Kai Shek, so that China could get aids from other countries while they were struggling under the Japanese's occupation. The people in India were very united and loyal other than volunteering to join the army, about 2.5 million servicemen and women contributed to the war effort on their own choice. Other than joining the British army, the Indians also helped Britain with their economy during the war. ...read more.

All the above showed that there was a lack of trust between India and Britain. As India did not do very much in helping the Britain during World War Two, British government sent Cripps to negotiate that if India helped in the war effort, British would then leave India in return. However, the congress rejected this plan, and carried out the "Quit India" campaign trying to throw British government out. This showed that the Indians were not satisfied with the British government. In conclusion, I think that government and the Congress was always enemies and they never really co-operated with each other. The relationship between Britain and the League: The Muslim League was set up in 1906 by Muslims who feared of Hindu domination and discrimination. But during that time, most important Muslim leaders were in the Congress. Jinnah resigned and became the leader of the Muslim League in the 1930s. When the second Government of India Act was executed, the League rejected the act because the Muslims and the League did not gain much power as the result of that. This showed that the League was not very satisfied with British rule before World War two. However this was not the case during and after the war. The League fully co-operated with the British government, and supported the British government in India. ...read more.

But it turned that the Direct Action was a series of bloodsheds between the Hindus and Muslims. Therefore the British government appointed Lord Mountbatten to settle this problem. Mountbatten came up with the conclusion that if there are two separate state, the bloodsheds would stop. He then persuaded the Congress, and the Congress agreed to partition on 3 June, 1947. The four most important individuals involved in the decision making were Nehru, Gandhi, Jinnah and Lord Mountbatten. Nehru and Gandhi were the leaders of the Congress party. They always wanted a united India as they believed that the people must be united to develop the country. However Lord Mountbatten persuaded them that it was impossible in 1947. They agreed with Mountbatten's proposal on 3 june, 1947. Mountbatten was the most important of all. He decided to partition India and persuaded the Congress to accept his proposal. However he had too little time to fix the border of the two countries, which lead to continuous violence between the Hindus and the Muslims. He was also appointed by the British government to divide all the government's assets and gold reserve to both countries. Lastly, Jinnah was the leader of the Muslim League. He wanted a new state called Pakistan, which meant "Land of Pure" and it is also an acronym of the states at the north-west of India. He was important because he called for the Direct Action and forced the Congress to accept Mountbatten's proposal. Sai Yuet CHOW 11N 5437 History Coursework ...read more.