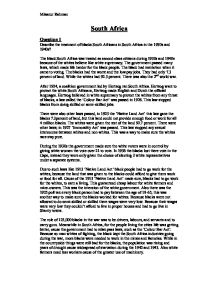 South Africa Question 1 Describe the treatment of blacks South Africans in South Africa in the 1930s and 1940s? The black South Africa was treated as second-class citizens during 1930s and 1940s because of the whites believe like white supremacy. The government passed many laws, which made life harder for the black people. The black had restriction when it came to voting. The blacks had the worst and the low pay jobs. They had only 7.3 percent of land. While the whites had 92.3 percent. There was also the 2nd world war. After 1924, a coalition government led by Hertzog ran South Africa. Hertzog want to protect the white South Africans, Hertzog made English and Dutch the official languages. ...read more.

Due to such laws like 1913 'Native Land Act' black people had to go work for the whites, because the land that was given to the blacks could afford to give them work or food for all. Cause of the 1913 'Native Land Act' made sure, blacks had to go work for the whites, to earn a living. This guaranteed cheap labour for white farmers and mine-owners. This was the intension of the white government. Also there was the 1925 poll tax every black person had to pay between the age of 18-65, this was another way to make sure the blacks worked for whites. Because blacks were not allowed to do semi-skilled or skilled there wages were very low. ...read more.

In 1941 President Roosevelt of America and Winston Churchill prime Minster of Britain issue a document called the "Atlantic Charter". The charter stated the allies are fighting to save freedom; democracy, peace and said people had the right the right to choose their government. This gave black hopes to turn reality. Soon after the second world war ended the situation hadn't improve significantly. The African National Congress (ANC) was a black political organisation. During the war, new members joined including Nelson Mandela, Oliver Tambo and etc. they set up a youth league, that threaten the government. In 1943 the ANC published "Africans Clams" which showed how clear it want to get freedom, democracy and equality, but the government ignored it. In 1944 there were many demonstrations led by ANC against pass laws. In 1946 blacks mine workers went on strike for higher wages, the strike was broken by force. Six died and 400 injured. Mizanur Rahman ...read more.