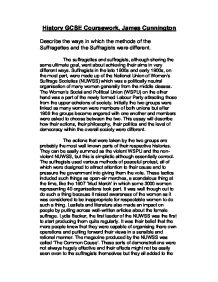 Describe the ways in which the methods of the Suffragettes and the Suffragists were different.

History GCSE Coursework, James Cunnington Describe the ways in which the methods of the Suffragettes and the Suffragists were different. The suffragettes and suffragists, although sharing the same ultimate goal, went about achieving their aims in very different ways. Suffragists in the late 1800s and early 1900s, on the most part, were made up of the National Union of Women's Suffrage Societies (NUWSS) which was a politically neutral organisation of many women generally from the middle classes. The Women's Social and Political Union (WSPU) on the other hand was a part of the newly formed Labour Party attracting those from the upper echelons of society. Initially the two groups were linked as many women were members of both unions but after 1908 the groups became angered with one another and members were asked to choose between the two. This essay will describe how their actions, their philosophy, their politics and the level of democracy within the overall society were different. The actions that were taken by the two groups are probably the most well known parts of their respective histories. They can be easily summed as the violent WSPU and the non-violent NUWSS, but this is simplistic although essentially correct. ...read more.

This hard line stance is a result of the belief that women should not be given the vote by men but that they should force men to give them the vote by leaving the government with no other option. This core belief is what gives rise to their militancy and is the most fundamental difference between the NUWSS and the WSPU. As a result of their beliefs, the WSPU were despised by many politicians especially but their extremism proves, if nothing else, that women were becoming increasing angry about their political status and that ignoring the issue was now not and option. If we read the situation like that, we see that the WSPU were actually succeeding in eliminating some of the government's options. Unlike the two union's philosophical standpoints, there is no framework of similarity between the NUWSS and the WSPU when it comes to their degree of democracy. The NUWSS was an organisation with an elected president, Millicent Fawcett and an elected executive committee that was voted for every year by the members of the NUWSS. Originally they were separate organisations that were unified under the name of the NUWSS so the local societies still had a certain degree of independence from ...read more.

I believe this because although the WSPU managed to create enormous amounts of publicity for the cause, more so than the NUWSS, they failed in making politicians change their minds and even made some turn against them in elections shortly before 1914. Whatever the NUWSS may or may not have done they never harmed the movement through the use of violence as the WSPU seem to have done. By the start of World War 1 it would be obvious to any political spectators which of the two organisations was performing better, with many leading members of the WSPU, including Christabel, in exile. The NUWSS, although some Liberal members of the union were about to stage a minor revolt, were working well during the year before the war and due to some positive action from high-ranking members of the Conservative Party the Liberals appeared to have been taking steps to win back the NUWSS. Had it not been for the breakout of war some historians believe that the Liberals would have passed an Act of Parliament in 1915 granting Suffrage to women over thirty. This why I believe that the slow and steady method of the NUWSS was most effective. ...read more.