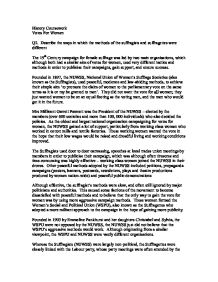 Describe the ways in which the methods of the suffragists and suffragettes were different.

History Coursework Votes For Women Q2. Describe the ways in which the methods of the suffragists and suffragettes were different The 19th Century campaign for female suffrage was led by two main organisations, which although both had a similar aim of votes for women, used very different tactics and methods in order to publicise their campaigns, gain support, and ensure success. Founded in 1897, the NUWSS, National Union of Women's Suffrage Societies (also known as the Suffragists), used peaceful, moderate and law-abiding methods, to achieve their simple aim 'to promote the claim of women to the parliamentary vote on the same terms as it is or my be granted to men'. They did not want the vote for all women; they just wanted women to be on an equal footing as the voting men, and the men who would get it in the future. Mrs Millicent Garrett Fawcett was the President of the NUWSS - elected by the members (over 600 societies and more than 100, 000 individuals) ...read more.

Founded in 1903 by Emmeline Pankhurst and her daughters Christabel and Sylvia, the WSPU were not opposed by the NUWSS, the NUWSS just did not believe that the WSPU's aggressive methods would work. Although originating from a similar viewpoint, the WSPU and NUWSS were vastly different organisations. Whereas the Suffragists (NUWSS) were largely non-political, the Suffragettes were closely linked with the Labour party, whose party meetings were often attended by the Pankhursts as speakers. In addition, the Suffragists had a vast grass-root support system among working class women, whereas the Suffragettes had very few working class members (Annie Kenney being a high profile example). The early examples of the Suffragette's disruptive campaign included members attending political party meetings and heckling politicians/speakers with questions on how they intended to work for female suffrage, resulting in their removal and often, arrest. Rather than pay fines, many members opted to be jailed in order to further publicise the campaign. This publicity attracted new recruits and encouraged the WSPU's militant approach. ...read more.

By 1913-14, few suffragette bombers were caught, increasing political & public anger and opposition towards the WSPU. Those who were imprisoned often went on hunger strike, and many were brutally force-fed. This was publicly condemned, resulting in the end of this cruel practice. Instead, women were allowed to go on hunger strike but they were released as soon as they became ill. Once recovered, they would be re-arrested and re-imprisoned until their sentence was completed. This successful means of dealing with hunger strikes, was the governments only real weapon against the WSPU, and was known as the 'Cat and Mouse' Act. Essentially, the suffragist methods were intended to work to show the merits of the campaign and were more prepared to compromise with the government in order to allow at least some women vote (the new Reform Bill, 1911). However the militant and aggressive WSPU were far less prepared to co-operate and instead, intended to mock and torment the government and their opposition until they conceded 'defeat', and agreed to meet the WSPU's demands. It is in this way that many historians have drawn parallels between the Suffragettes and terrorism. ...read more.