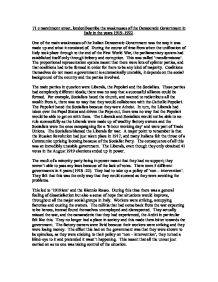 71 c marchmont street, londonDescribe the weaknesses of the Democratic Government in Italy in the years 1919-1922. One of the main weaknesses of the Italian Democratic Government was the way it was made up and what it consisted of. During the course of time from when the unification of Italy took place through to the end of the First World War, the parliamentary system had established itself only through bribery and corruption. This was called 'transformismo'. The proportional representation system meant that there were lots of splinter parties, and that coalitions had to be formed in order for there to be any kind of majority. Coalitions themselves do not mean a government is automatically unstable, it depends on the social background of the country and the parties involved. The main parties in question were Liberals, the Popolari and the Socialists. ...read more.

The consequence of all this was an incredibly unstable government. The Liberals, even though they only obtained 41 votes in the August 1919 elections ended up in power. The result of a minority party being in power meant that they had no support; they weren't able to pass any laws because of the lack of votes. There were 5 different governments in 4 years (1918 -22). They had to take up a policy of 'non - intervention'. They felt that this was the only way that they could succeed as they were avoiding the problems. This led to '1919ism' and the Biennio Rosso. During this time there was a general feeling of dissatisfaction but also a sense of hope that situations would improve, throughout all the major social groups in Italy. Workers were striking, occupying factories and ousting the owners. ...read more.

The people wondered if they had gone to war for no reason. This led to D'Annunzio, a famous Italian poet marching into and capturing Fiume, with a small army of nationalists and ex-soldiers. The government was at a loss, this poet was making an example of them, defying the peace settlement, and appeared like a national hero all the while. 'Non-intervention' meant that Fiume was occupied for over 18 months before they sent any troops over. These weaknesses of the Government were well exposed during the period of 1919-22. However, the government didn't realise it was in turmoil because it generally didn't get involved in the problems that Italy faced. During the war, the slogan was "the discipline of today is the liberty of tomorrow", this meant that Italians had extremely high hopes for after the war. These high expectations teamed up with failures of the government to deliver their promises meant that the Italian people became fed up of democracy. Democracy became associated with social unrest. ...read more.