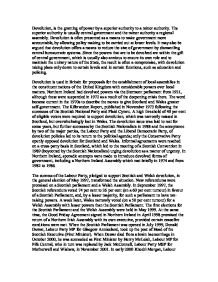 Devolution, is the granting of power by a superior authority to a minor authority. The superior authority is usually central government and the minor authority a regional assembly. Devolution is often presented as a means to make government more accountable, by allowing policy making to be carried out at lower levels. It may also be argued that devolution offers a means to reduce the size of government by dismantling central bureaucratic systems. Since the powers that are to be devolved are within the gift of central government, which is usually also anxious to ensure its own role and to maintain the unitary nature of the State, the result is often a compromise, with devolution taking place only down to certain levels and in certain functions, such as education and policing. Devolution is used in Britain for proposals for the establishment of local assemblies in the constituent nations of the United Kingdom with considerable powers over local matters. Northern Ireland had devolved powers via the Stormont parliament from 1921, although these were suspended in 1972 as a result of the deepening crisis there. The word became current in the 1970s to describe the moves to give Scotland and Wales greater self-government. The Kilbrandon Report, published in November 1973 following the successes of the Scottish National Party and Plaid Cymru. ...read more.

In addition, there may be a blurring of the boundaries between the jurisdictions of each parliament, creating a potential for aspects of government duties to be neglected due to confusion over who holds the responsibility. Devolution has led to the absurd situation whereby Scottish Mps are allowed to vote in Westminster on matters concerning England, but English MPs have no say over matters relating to Scotland. This means that Scottish and Welsh representatives have in theory twice as much power as English representatives: this is clearly undemocratic. The creation of another level of bureaucracy is a drain on the finances of the whole country. The cost of setting up the Welsh and Scottish parliaments was �60 million and the running costs and salaries for elected officials and civil servants adds an extra burden to the economy - could the money not be better spent on health, education, etc. which would have a more obvious direct benefit for the taxpayer. The Scottish Parliament and the Welsh assembly do not have the same powers as Westminster, therefore all MPs have an equal say in the highest governing power in the UK. A further way to possibly resolve this issue is to devolve the English Parliament, as suggested by the Kilbrandon Committee. It makes for a far better democratic and representative system for decisions to be taken at different levels. ...read more.

There has been much public disquiet about the cost of the new parliamentary building at Holyrood. The sudden death of the Scottish First Minister, Donald Dewar, in October 2000, did not help to stabilise the Parliament. Dewar was rightly regarded as the elder statesman of the new Parliament and as a former Cabinet member of the Labour Government could command respect for his views in London. His death meant that the Scottish Parliament lost a valuable link to Downing Street. But has the Scottish Parliament achieved anything? In its first year it passed eight bills into acts and eleven bills were going through the parliamentary process. Therefore, in 12 months 19 issues relating to Scotland were either finalised or going through the process of being accepted or not. On average, the House of Commons passed one or two acts a year that directly related to Scotland. In this sense, the Scottish Parliament has been very successful. Prior to this in pre-devolutionary days, those who represented Scotland at Westminster could only present their issues within the forum of Westminster. Seven times a year Scottish Question Time was held. Now debate on uniquely Scottish affairs is a week-in week-out affair at Holyrood and Scottish issues can still be discussed at Westminster with Scottish MP's representing their constituents there as well as MSP's representing their constituents at Holyrood. In this sense, the Scots get a better 'deal' than their English counterparts as they have representation in two Parliaments. ...read more.