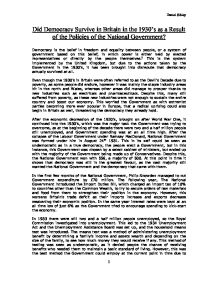 Did Democracy Survive in Britain in the 1930's as a Result of the Policies of the National Government?

Did Democracy Survive in Britain in the 1930's as a Result of the Policies of the National Government? Democracy is the belief in freedom and equality between people, or a system of government based on this belief, in which power is either held by elected representatives or directly by the people themselves.5 This is the system implemented by the United Kingdom, but due to the actions taken by the Government in the 1930's, it has been brought into disrepute that democracy actually survived at all. Even though the 1930's in Britain were often referred to as the Devil's Decade due to poverty, as some people did endure, however it was mainly the staple industry areas hit in the north and Wales, whereas other areas did manage to prosper thanks to new industries such as electricals and pharmaceuticals. Despite this, many still suffered from poverty, as these new industries were not enough to sustain the entire country and boost our economy. This worried the Government as with extremist parties becoming more ever popular in Europe, that a radical uprising could also begin in Britain as well, threatening the democracy they already hold. After the economic depression of the 1920's, brought on after World War One, it continued into the 1930's, which was the ...read more.

All these decisions taken by the National Government helped strengthen British Democracy, and the people's support of their Government, even though they had not actually elected them. The biggest threat to Britain's democracy was the rise of extremist parties due to the influence of what was happening with the increase of fascism in Germany with the Nazis and Hitler, fascism in Italy with Mussolini, and the beginning of communism in Russia. People had seen how these extremes had helped the respecting countries, and some believed it would work here as well. After Oswald Mosley's failure to gain any seats for his New Party at the 1931 General Election, he founded the British Union of Fascists (B.U.F.) wad formed on the 1st of October 1932, with quite some support, especially from the press, in particular the Daily Mail. By mid 1940's, support for the B.U.F. had grown to 50,000, and it seemed as though the fascist movement was on its way. The same year, at a B.U.F. political rally at Olympia, Moseley was giving a speech to 10,000 people. However, as 2,000 of the tickets were given away, it allowed opposition to the Blackshirts, such as the communists, other left wing parties and Jewish organisations, to infiltrate the speech, and disrupt it using violence with weapons, injuring many Blackshirt supporters. ...read more.

The communist party did not have a good name for themselves, after the British did not agree with what happened with communism over in Russia back in the 1917, it was hard for people to support it here over the fear of what the consequences could be. To conclude, the National Government maintained its Democracy due to several reasons. Firstly, the poverty that had hit Britain was not as bad as that in places such as Russia and Germany, so it did not stimulate the extremism like it did in those countries. As Britain's poverty was spread only over certain areas, not complete widespread as in the countries previously mentioned, so the areas not as badly affected could then influence over the rest of the country. The people of this country were the main reason that Britain kept democracy and did not resort to extremist parties. In the face of adversity, the British people all united with pride to support their Government to find a solution to their problems, instead of resorting to extremism. Also, they way the National Government dealt with problems in order to benefit the country kept their support behind them. Also, there was no real strong opposition, as the National Government managed to curtail the extremist parties, to prevent them from gaining any real strong power and support, allowing them to stay strong, and their democracy to remain. ...read more.