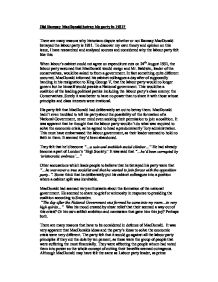 Did Ramsay MacDonald betray his party in 1931?

Did Ramsay MacDonald betray his party in 1931? There are many reasons why historians dispute whether or not Ramsay MacDonald betrayed the labour party is 1931. To discover my own theory and opinion on this issue, I have researched and analysed sources and considered why the labour party felt like this. When labour's cabinet could not agree on expenditure cuts on 24th August 1931, the labour party assumed that MacDonald would resign and Mr. Baldwin, leader of the conservatives, would be asked to from a government. In fact something quite different occurred. MacDonald informed his cabinet colleagues a day after of supposedly handing in his resignation to King George V, that the labour party would no longer govern but he himself would preside a National government. This would be a coalition of the leading political parties including the labour party's class enemy: the Conservatives. ...read more.

It was said that "...he'd been corrupted by 'aristocratic embrace'..." Other accusations which leads people to believe that he betrayed his party were that "...he was never a true socialist and that he wanted to join forces with the opposition party..". Some think that he deliberately put his cabinet colleagues into a position where a cabinet split was inevitable. MacDonald had seemed very enthusiastic about the formation of the national government. He seemed to share no grief or animosity in response to presiding the coalition according to Snowden. "The day after the National Government was formed he came into my room...in very high spirits..." Was his mood created by shear relief that their seemed a way out of this crisis? Or his own selfish ambition and narcissism that gave him this joy? ...read more.

There was a great amount of pressure on MacDonald to form a national government, not only by the press but by request of George V. He believed that it was MacDonald's patriotic duty to head it. MacDonald was vastly ignorant of Economic Policy because of his lack of understanding in this particular field. He much preferred to concentrate on foreign and imperial affairs. This does not show betrayal but a weakness in his leadership. By heading the National Government in fact he committed political suicide; as a result he was expelled from his party and appeared to be an unsuitable leader as he couldn't get the country out of a national crisis unless he formed a national government. In conclusion to my study, I do not believe that MacDonald betrayed his party or acted purely in self-interest. I believe he did what he thought was necessary to try and solve that economic policy even though he lacked an understanding in this province. ...read more.