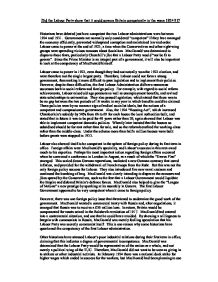 Did the Labour Party show that it could govern Britain competently in the years 1924-31? Historians have debated just how competent the two Labour administrations were between 1924 and 1931. Governments are normally only considered "competent" if they have managed the economy efficiently, prevented widespread corruption and maintained law and order. Labour came to power at the end of 1923, a time when the Conservatives and other right-wing groups were spreading vicious rumours about Socialism. MacDonald was determined to disprove these fears, particularly Churchill's jibe that a Labour Party would "not be fit to govern". Since the Prime Minister is an integral part of a government, it will also be important to look at the competency of MacDonald himself. Labour came to power in 1923, even though they had not actually won the 1923 election, and were therefore not the single largest party. Therefore, Labour could not form a strong government, thus making it more difficult to pass legislation and to implement their policies. However, despite these difficulties, the first Labour Administration did have numerous successes both in social reform and foreign policy. For example, with regard to social reform achievements, Labour raised old age pensions as well as unemployment benefits, and revived state scholarships to universities. They also passed legislation, which stated that there was to be no gap between the two periods of 16 weeks in any year in which benefits could be claimed. ...read more.

Asquith said that the Labour Party had "committed suicide", and many historians have argued that MacDonald showed poor leadership and incompetence during this episode. However, other historians have claimed that MacDonald knew from the beginning of Labour's time on office that his administration would not last long, and merely wanted to show the public that Labour could govern competently, and that their fears about a socialist revolution had been unjustified. Most historians believe that the 1924 election was a success for the Labour Party because, although they lost 40 seats, they gained a million extra votes. Many voters had clearly been impressed by Labour's moderation in office and were immune to the "Red Scare". Large sections of the public seemed to believe that Labour had moved into the middle ground of British politics. Therefore, many historians have argued that MacDonald had achieved his aim of presenting the Labour Party as a national party able to represent the interests of all sections of society, and his government had shown competency in their governance, thus disproving Churchill's jibe that a Labour Party would "not be fit to govern". Labour won the election of 1929, giving MacDonald the chance to form his second minority government. Again, the fact that Labour did so well in the 1929 election indicates that large sections of the public had been impressed by the first Labour government's competence. ...read more.

Therefore, Labour may be labelled incompetent in the way in which they handled the 1931 economic crisis, as they appeared unable to reach a consensus on what action to take. In conclusion, it must be said that the Labour Government did, in many instances, show that it could govern Britain effectively in the years 1924-31. But Labour was very unfortunate in that it came to power during difficult circumstances. For example, the first Labour administration came to power at a time when there were vicious fears and rumours about socialism. MacDonald also had to deal with ideological divisions within his party, particularly those between the socialist groups and the trade unionists. The second administration came to power the same year as the Wall Street Crash, which was a cruel twist of fate for MacDonald, as for the first time he was in control of the single largest party in the Commons. The 1931 banking crisis was also very unfortunate for the Labour Government. Most historians argue however that, despite the immense difficulties that the Labour Party was confronted with, it actually did a good job of governing, and showed itself to have the ability of representing the nation as a whole, rather than just being a narrow-sighted pressure group for the TUC. MacDonald had fulfilled his aims of disproving the Conservative's jibes about both socialism and the Labour Party. Labour's successes in foreign policy as well as in economic policy showed a great deal of competence, despite the fact that most of the cabinet ministers had little or no governmental experience. ...read more.