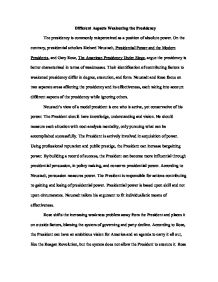 Different Aspects Weakening the Presidency The presidency is commonly misperceived as a position of absolute power. On the contrary, presidential scholars Richard Neustadt, Presidential Power and the Modern Presidents, and Gary Rose, The American Presidency Under Siege, argue the presidency is better characterized in terms of weaknesses. Their identification of contributing factors to weakened presidency differ in degree, execution, and form. Neustadt and Rose focus on two separate areas affecting the presidency and its effectiveness, each taking into account different aspects of the presidency while ignoring others. Neustadt's view of a model president is one who is active, yet conservative of his power. The President should have knowledge, understanding and vision. He should measure each situation with cost-analysis mentality, only pursuing what can be accomplished successfully. The President is actively involved in acquisition of power. Using professional reputation and public prestige, the President can increase bargaining power. By building a record of success, the President can become more influential through presidential persuasion, in policy making, and conserve presidential power. According to Neustadt, persuasion measures power. The President is responsible for actions contributing to gaining and losing of presidential power. Presidential power is based upon skill and not upon circumstance. Neustadt tailors his argument to fit individualistic means of effectiveness. Rose shifts the increasing weakness problem away from the President and places it on outside factors, blaming the system of governing and party decline. ...read more.

It is obvious that Rose's views on the presidency are that it should be an office of unrestricted powers. Rose sites Hamilton as important to the study of presidential power. Hamilton was part of "the Radicals" group of constitutional framers which outline the presidency as strong and independent with broad power. Neustadt preaches conservation of power. If the President must act, he has failed. Both Neustadt and Rose emphasize the importance of being a Washington insider. Rose presents Carter as an example of failure due to being and outsider. Carter campaigned as a Washington outsider, and did not like Washington politics. These factors lead to low support for presidential agendas. Rose again attributes the decline of political parties to failure of presidential support. The shift from party based to candidate based campaigns has weakened presidential ties in Washington. When a candidate comes into office he does not bring with him a broad base of party support anymore. The President is thusly restricted in his abilities to produce policy changes. Neustadt stated Carter also as a weak president due to low professional reputation. Carter could not get what he wanted from Congress like tax on waterways and the National Energy Plan. Weakening party ties leads to and individual based campaign, which leads to outsider failure. Rose identifies the media as shaping public perceptions of the President. ...read more.

Clinton's loyalty to his soft money contributors is obvious in his health care plan. Lobby reform policies that Rose proposes will not work, because they need to be passed by people who are already benefiting from the system. Congress is not inclined to lose funding or perks given to them by outside influences. Although Rose's description of bureaucracy is exaggerated, his idea of reforming patronage is necessary. Presidents should appoint leaders of implementation who are more responsive to the executive office, and accountable to the President. Reforming the patronage system allows for better evaluation of the President. Repealing the twenty-second amendment adds to the power of the presidency by reducing lame duck views and increasing Washington affiliation. An outsider president can increase is ability to bargain if term limits are not imposed. Even a Washington outsider can eventually find his niche and be effective, but not if he is limited. Lame duck views of a second term president decrease his bargaining power and effectiveness. Neustadt and Rose identify factors which contribute to weaknesses of the presidency, but fail to recognize the big picture. Both analysis are narrow and focus on only specific issues. Neustadt's arguments are favorable, because they allow the President to take an active role in acquisitioning power. Rose's views of a helpless president, dependent on outside reform to function, are impracticable. It is hard to believe that the President is so debilitated that he can not on his own actively attain and retain power. ...read more.