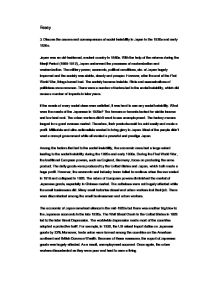 Discuss the causes and consequences of social instability in Japan in the 1920s and early 1930s.

Essay 3. Discuss the causes and consequences of social instability in Japan in the 1920s and early 1930s. Japan was an old-fashioned, ancient country in 1860s. With the help of the reforms during the Menji Period (1868-1912), Japan underwent the processes of modernization and westernization. The military power, economic, political conditions, etc. of Japan hugely improved and the society was stable, steady and prosper. However, after the end of the First World War, things turned bad. The society became instable. Riots and assassinations of politicians were common. There were a number of factors led to the social instability, which did cause a number of impacts in later years. If the needs of every social class were satisfied, it was hard to see any social instability. What were the needs of the Japanese in 1920s? The farmers or tenants looked for stable income and low land rent. The urban workers didn't want to see unemployment. The factory owners longed for a good oversea market. Therefore, their products could be sold easily and made a profit. Militarists and ultra-nationalists wanted to bring glory to Japan. Most of the people didn't want a corrupt government while all wanted a powerful and prestige Japan. ...read more.

On the other hand, the interests of the common people were totally ignored. The government tried to check popular social movements like labour activities. The discontent and disbelieve to the party government from common people can be imagined. In the field of foreign policy, the 'Shidehara Policy' disappointed the ultra-nationalists and militarists. Since 1890s, the Japanese government adopted an aggressive policy. In fact, they won and benefited from the Sino-Japanese War (1894-1895), Russo-Japanese War (1904-1905) and First World War (1914-1918). However, 'Shidehara Policy', which was about international cooperation and economic peaceful expansion, was adopted after the First World War. For example, in the Washington Conference (1921) and London Conference (1930), the number of Japanese warships was confined. And the policy towards China was a peaceful and helpful one during the 1920s. However, in the eyes of the ultra-nationalists and militarists, the policy was weak and humiliation. Due to the 1889 constitution, the militarists had the privilege to speak directly to the Tenno and could stop the cabinet. The discontented and disappointed militarists were looking forward to regain the power. There were a few new ideology in Japan in the 1920s and they had an impact on the social instability. ...read more.

The economic of Japan became better again as the factories were busy for producing arms. Men were moved to Manchuria and other places as soldiers and the problem of overpopulation were solved. The Allied Occupation during 1945-1952 were one of the consequences of the social instability in 1920s and 1930s as well as the results of the rise of militarists in 1930s. Because of a number of reasons, the Japanese finally lost the Pacific Wars in 1945, which was the first serious military defeat that Modern Japan suffered. They were asked to surround unconditionally and were occupied by the Allies in the following years. The Allies, mainly the USA help the Japan to rebuilt, reform and made sure they were not harmful to the international peace in the future. As shown, there were a number of internal and external reasons led to the social instability in Japan during the 1920s and early 1930s. It is fair to say the economic ones played a large extent as they directly harmed the life of the commons. The consequences of the social instability during the 1920s and early 1930s were significant. The most significant one was the rise of the militarists. The other consequences, such as the start of Pacific War, the Allied Occupation, were mainly the result of the rise of militarists. ...read more.