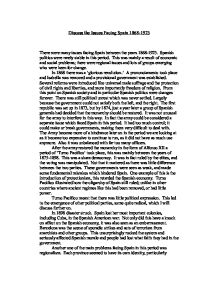 Discuss the Issues Facing Spain 1868-1923 There were many issues facing Spain between the years 1868-1923. Spanish politics were rarely stable in this period. This was mainly a result of economic and social problems; there were regional issues and lots of groups emerging who were keen for change. In 1868 there was a 'glorious revolution.' A pronunciamento took place and Isabella was removed and a provisional government was established. Several reforms were introduced like universal male suffrage and the protection of civil rights and liberties, and more importantly freedom of religion. From this point on Spanish society and in particular Spanish politics were changes forever. There was still political unrest which was never settled. Largely because the government could not satisfy both the left, and the right. The first republic was set up in 1873, but by 1874, just a year later a group of Spanish generals had decided that the monarchy should be restored. It was not unusual for the army to interfere in this way. In fact the army could be considered a separate issue which faced Spain in this period. It had too much control; it could make or break governments, making them very difficult to deal with. The Army became more of a hindrance later on in the period we are looking at as it became too expensive to continue to run, as it did not have as much use anymore. ...read more.

This was an anarchist trade union which had a wide array of beliefs, and a large amount of support, Anarchism was very successful in Spain, in comparison with the rest of the world. The Anarchist movement was revolutionary, and not afraid to use violence, it also used political strikes to gain attention, which have had an affect on Spanish politics at the time. The Basque Country also had a fierce sense of nationalism. However unlike Catalonia, they were strong Catholics and also quite conservative. This was also a region from where a political party had a strong base; the UGT was a socialist party and was supported by a majority of the Basque workers, and this support grew rapidly during the First World War. Other left wing parties seemed to be popular in this region too, like the PSOE. These sharp contrasts in opinion made it difficult for Spain to work together in a coherent fashion, especially with radical parties having so much support. Many believed that democracy was not working, there was violence and unrest in Spain and a different approach was needed. This could explain why Primo de Rivera came to power so easily in 1923. The Spanish economy was also an issue in this period. Agriculture was a significant problem, especially as more than 50% of the population worked in agriculture. ...read more.

In August the socialist, urged on by the CNT called a general strike. They felt that in these turbulent times, when even the army had deserted and formed separate juntas, that there would opposition to a revolutionary attempt to overthrow the government. The movement was crushed, however this did illustrate the fact that people wanted change, and that Spain might be ready for it. Most groups like the separatist, anarchists, republicans, radicals and also the Army and Socialist who I have already mentioned, were all in favour of change, even in the form of Primo de Rivera. And those who did not support him were unlikely to resist him. All of the problems and attitudes I have mentioned were aggravated by World War I, it made it difficult for Spain to import goods, and inflation soon took hold over the economy. This economic crisis was made worse by the Moroccan war which was extremely unpopular with Spanish forces after their defeat at the Battle of Anoual. This was the final straw, in the years that followed a succession of Spanish governments collapsed and there was unrest across Spain, particularly Barcelona. It was thought that the King would be blamed for this defeat, before the investigation was finished General Miguel Primo de Rivera declared a pronunciamento in September 1923. This was excellent timing, Spain was desperate for change, and many, including the King, believed that Rivera could be 'The Iron Surgeon' that Spain was looking for. ...read more.