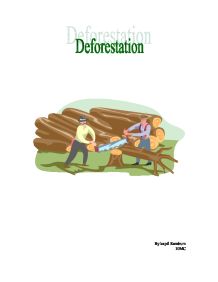 Discuss the politics involved in deforestation.

By kapil Ramburn 10MC Deforestation is the clearance of forest land. Today it's mainly taking place in the LEDCS that have tropical rainforest. According to key geography book 2 pg38 a reliable source dated from 2001 which the notes are good, the rapid clearance on recent years was made deforestation a key global issue. Some estimates suggest that one-fifth of the Amazon forest was cleared between 1960 and 1990. But why do they cut down the forest? From the key geography book 2 the source on page 38 says by the rapid growing population the demand of wood started to go high. The government in Brazil had to resettle some of the many landless people. (This source was reliable because I trust the book, also it is recent as it was published in 2001 and the notes I have used were really good as it was clearly explained) The trans-national companies like Coca Cola, ford, BMW, etc... come to Brazil and some wished to come to extract raw materials and have support from the government. ...read more.

And also the local people benefits from land the government give so that they grow to sell and use for themselves. The government of Brazil benefits from the money that the factories and local people are gaining through tax. And also the MEDCS benefits from the cheap wood from the Amazon rainforest. (Source found in Brazil 2000 and key geography book2 as it is recent 2000, 2001) There are many consequences of deforestation; one of them is loss of wildlife. (Source found in key geography book 2 page 40 the source is useful as I trust the book as I have used it before). It is written "many birds, insect, reptile and other animal rely upon trees for food or shelter. They die or are forced to move away if their habitats is destroyed." And also loss of medicines "over half of our modern medicines come from the rainforest, these includes painkillers and quinine (used to treat malaria). Recently one plant, periwinkle has proved successful to treating child leukaemia. Perhaps the rainforest may hold cures for cancer and aids if there are cleared, we will never know". ...read more.

Other reasons are government policies are rarely followed and logging companies rarely replace the felled trees with new ones. According to key geography book 2 the government tried to use tax on hardwood product, limit the numbers of tree felled and leave enough trees to let the forest recover. But the problem is that it is really hard to keep to the target (source found in key geography book2 2) From all this research I have made my decision on the hypothesis, 'deforestation of the Amazon rainforest is a major global environmental issue, which only the Brazilian government can solve'. After a long decision I have made my choice that the Brazilian government won't be able to solve the problem but every one in the world. Like MEDCS could help by decreasing their debt and buying the Amazonian woods for more money so that they have money to pay the companies that cut down trees to replant the trees fell. And also the MEDCS could help them in the sustainable industries by helping the government to organise and plan the industry well so that they would solve the problem of difforestation. ...read more.