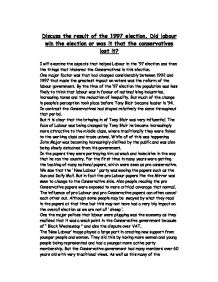 Discuss the result of the 1997 election. Did labour win the election or was it that the conservatives lost it?

Discuss the result of the 1997 election. Did labour win the election or was it that the conservatives lost it? I will examine the aspects that helped Labour in the '97 election and then the things that hindered the Conservatives in this election. One major factor was that had changed considerably between 1992 and 1997 that made the greatest impact on voters was the reform of the labour government. By the time of the '97 election the population was less likely to think that labour was in favour of nationalising industries, increasing taxes and the reduction of inequality. But much of the change in people's perception took place before Tony Blair became leader in '94. In contrast the Conservatives had stayed relatively the same throughout that period. ...read more.

For the first time in many years were getting the backing of many national papers, which were seen as pro conservative. We saw that the ` New Labour ' party was wooing the papers such as the Sun and Daily Mail. But in fact the pro Labour papers like the Mirror was seen to change to the Conservative side. Also people reading the pro Conservative papers were exposed to more critical coverage that normal. The influence of pro Labour and pro Conservative papers can often cancel each other out. Although some people may be swayed by what they read in the papers at that time but this may not have had a very big impact on the overall election as we are not all ` sheep '. ...read more.

The Labour party also seemed very together and united over different issues, but the Conservatives looked quite broken up by their different views on important subjects like Europe. Overall we see that the new image and the togetherness of the Labour. Had greatly increased support whereas the Conservatives looked the complete opposite. And they paid for this as 2 million people had swapped from Conservative to Labour and also had lost lots of strong seats and were in a state of disarray. My view is that Labour won the election because the campaigned better and this was showed in the voting as their voters turn up to vote for them whereas the Conservatives had low turn outs in the polls. With most things the ability to evolve is crucial and the labour party were able to this, unlike the Conservatives. ...read more.