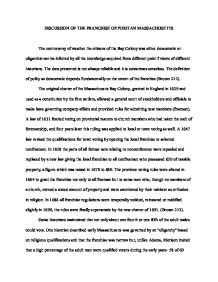 Discussion of the franchise of puritan Massachusetts

DISCUSSION OF THE FRANCHISE OF PURITAN MASSACHUSETTS The controversy of weather the citizens of the Bay Colony was either democratic or oligarchic can be inferred by all the knowledge acquired from different point f views of different historians. The data presented is not always reliable and it is sometimes senseless. The definition of polity as democratic depends fundamentally on the extent of the franchise (Brown 212). The original charter of the Massachusetts Bay Colony, granted in England in 1629 and used as a constitution by the first settlers, allowed a general court of stockholders and officials to make laws governing company affairs and provided rules for admitting new members (freeman). A law of 1631 limited voting on provincial matters to church members who had taken the oath of foremanship, and four years later this ruling was applied to local or town voting as well. A 1647 law revised the qualifications for town voting by opening the local franchise to selected nonfreemen. In 1658 the parts of all former acts relating to nonconference were repealed and replaced by a new law giving the local franchise to all nonfreemen who possessed �20 of taxable property, a figure which was raised in 1670 to �80. The province voting rules were altered in 1664 to grant the franchise not only to all freeman but to some men who, though no members of a church, owned a stated amount of property and were sanctioned by their minister as orthodox in religion. ...read more.

He discovered that only 40 percent of the founders of the town were freemen , but that once a man was accepted as a "townsmen" he could dissent and be heard (Brown 216). Brown founded that 75 percent of the adult men in the period 1652- 1670 were church members who could have voted had they so desired, but that only 50 to 65 percetrn of thembothered to become freemen a requiremnt for voting on the province level.there was remarkable uniformity in religion in he town and overwhelming support on the part of both freemen and nonfreemen for the overwhelminmg support on the part of both freemen and nonfreemn for the colony's governmentin 1664 when the governmnet was challenged by Britain. Cambridge was extremely selevtive in admitting new settlers, but once inside, the inhabitants enjoyed much democracy.(Brown 217) rutman published his study of Boston in the time of John Winthrop in which he pointed out that, regerdless of the law and despite the fact that by 1649 fewer than half of the adult males were full church members, the town meeting gave "every indication of beingan open body." allthough he attmpted to distinguish the gentry from the generality, class divisions, he believed, were not strong and economic mobility was marked. ...read more.

Like Cambridge, Dedham had a high degree of political and economic democracy and much religious unity.(Brown 220) in 1967 Simmons published two articles amplifying the idea that it was not the quantity and power of freemanship that mattered. He stressed again that the purpose of the franchise legislation was to keep political control in the hands of the godly, not to enlarge the franchise. It appears doubtful that bi counting only those who paid ten shilings on any country rate historians can determine how many could vote, for the assessmnet ratios varied considerably. The most convincing evidence that he number of voters did not decertase as a result of the 1670 law is to be found in the town records which show how the law was put into practice. In 1680 the general town meeting in Watertown ordered that "all hose houlders" were to have the vote in town affairs. In Ipswich a 1679 list oif those allowed to vote in town affairs, when compared with a commoners list of 1678, revelas that at least 77.6 percnet of the adult males of Ipswich had the franchise. The evidence presented does not permit us to describe Massachustes as an oligarchy or an aristrocracy. Not only was the franchise extensive, but all political officials were subject to annual elections and no man had a hereditary right to oofice. (Brown 241) ...read more.