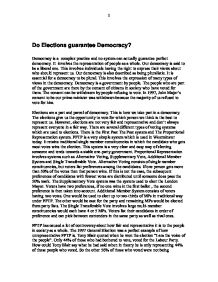 Do Elections guarantee Democracy? Democracy is a complex practice and no system can actually guarantee perfect democracy. It involves the representation of people as a whole. Our democracy is said to be a liberal one. This involves individuals having the right to express their views about who should represent us. Our democracy is also described as being pluralistic. It is essential for a democracy to be plural. This involves the expression of many types of views in the democracy. Democracy is a government by people. The people who are part of the government are there by the consent of citizens in society who have voted for them. The consent can be withdrawn by people refusing to vote. In 1997, John Major's consent to be our prime minister was withdrawn because the majority of us refused to vote for him. Elections are a part and parcel of democracy. This is how we take part in a democracy. The elections give us the opportunity to vote for which person we think is the best to represent us. However, elections are not very fair and representative and don't always represent everyone in a fair way. There are several different types of voting systems which are used to elections. There is the First Past The Post system and The Proportional Representation system. ...read more.

There is no point in having an election if not all sections of society are suitably informed. The current electoral system shows that there is a lot of discrimination against women and ethnic groups. Over 50% of the population are female, yet less than 1 in 5 MPs are women. It is clearly not very democratic that mostly males represent our population. This also applies to ethnic minorities, they only gained representation in 1987, but there were only 4 MPs. In 1997 the figure had risen to 7. The ethnic minority play a huge role in London and in many other cities across Britain and deserve far more representation. The people to blame for this are the local party selection committee. They prefer to choose "safe" candidates who suit the criteria of being white, male and middle aged. Greater anticipation of women and ethnic minorities is essential so that more groups are represented. The PR system is one which is preferred and used in many other European countries. A PR system is more representative than a FPTP system but it is still not perfect. The AV system retains a direct link between MPs and constituents and ensures that the winner has a majority of support at local level. This type of system is fairer to the smaller parties such as the Liberal Democrats and the Green party. ...read more.

in 1992, there should have been a referendum on the Maastricht Treaty under the Major Government. John Major had mentioned in the Conservative Manifesto that we will not be signing the Maastricht Treaty and will therefore not join the Euro. So when he was in power he refused to hold a referendum because he claimed that the public had given him a mandate because they had voted for him and they were aware of his policies. The result of this election has lead to a type of dictatorship from Major and refusing to have a referendum is refusing to represent and listen to the views of the general public and what other parties have to say. Elections do not guarantee total democracy. Total democracy can never be reached as not every single person in a country will be represented fairly. However, different types of electoral systems such as PR can guarantee a higher level of democracy than systems such as FPTP. The only times when elections have a great impact on democracy is when a greater proportion of the population who are eligible to vote actually make the effort. It is also vital that everyone is well informed and that the media behaves in a responsive manner so that people choose to vote on their own choice, not because newspapers have influenced them. Having achieved this, elections will be more representative and democratic. However, democracy will not be guaranteed but we will live in a far more equal and representative society. 1 ...read more.