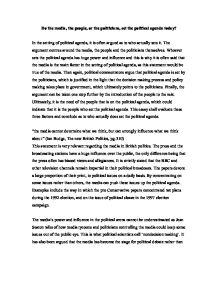 Do the media, the people,or the politicians, set the political agenda today?

If they devise a poor policy, it may be leaked to the press and subsequently they may loose their place in office. It can be said that ministers at times fear the press and this often influences their political agenda setting. There are those however, who claim that the press is in fact under the influence of a number of politicians. This would lead to the claim that it is in fact the politicians that set the political agenda. Bob Franklin claims that "Skilled and highly paid marketing and communications professionals create favourable media images for politicians and their policies." (Bob Franklin, Packaging Politics, pg-13) This would result in these images and documents being presented to the public through the media. This again shows that the media would be involved in influencing the public over a political agenda, but in this case, the media is the one that has been influenced in its printing from an indirect political source. This argument is further reinforced in the writings of John Eldridge, Jenny Kitzinger and Kevin Williams who argue that the media no longer simply offer public information about political affairs, but are increasingly being managed by politicians. ...read more.