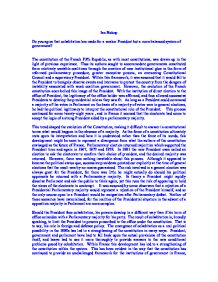 Do you agree that cohabitation has made for a weaker President but a more balanced system of government?

Ian Bishop Do you agree that cohabitation has made for a weaker President but a more balanced system of government? The constitution of the French Fifth Republic, as with most constitutions, was drawn up in the light of previous experience. Thus its authors sought to accommodate governments constituted form relatively unstable coalitions through the creation of new institutional glue in the form of reformed parliamentary procedure, greater executive powers, an overseeing Constitutional Council and a supervisory President. Within this framework, it was assumed that it would fall to the President to benignly observe events and intervene to protect the country from the dangers of instability associated with weak coalition government. However, the evolution of the French constitution soon belied this image of the President. With the institution of direct election to the office of President, the legitimacy of the office holder was affirmed, and thus allowed successive Presidents to develop the presidential role as they saw fit. As long as a President could command a majority of the votes in Parliament on the basis of a majority of votes won in general elections, he had the political legitimacy to interpret the constitutional role of the President. This process continued for some twenty-eight years , and in France it seemed that the electorate had come to accept the logic of a strong President aided by a parliamentary majority. This trend shaped the evolution of the Constitution, making it difficult to answer in constitutional terms what would happen in the absence of a majority. ...read more.

During periods of cohabitation the President remains a key figure in French political life. He maintains his crucial role as head of state, and the dignity which accompanies this role is by no means diminished in periods of cohabitation. The power of the President in foreign and defence matters remains great, and his assent is still required to make law. The great importance of Presidential elections demonstrates well how the Presidency remains a core component in the French Political system, and the parties still seek the office of President above all else. In periods of cohabitation, the executive effectiveness of the President and his staff is obviously weakened. In the first period of cohabitation the staff of the President were excluded from close contact with the ministries1. In the second period of cohabitation this deliberate limitation was less evident, but the effectiveness of the Elys�e was still limited. It is important to differentiate in this way between the three cohabitations. The different circumstances surrounding each of them, and the varying political climate of the day shaped the nature of the different cohabitations in distinct ways. In the first cohabitation of 1986 - 1988 the concept was a new one, and no one was entirely sure how the system might continue to function. The strong left-right animosities of the period led to a particularly adversarial atmosphere between the Prime Minister and the President. In contrast, the latest and current cohabitation of 1997 has seen not only the full acceptance of cohabitation as a norm of the French political system, but also a more co-operative relationship between President and Prime Minister. ...read more.

The continuation of stable government with strong leadership throughout the majority of the 1990s has demonstrated that the President can still take a very active lead in politics, and the advent of cohabitative governments is not a precursor to a decline in Presidential power in France. In conclusion, the advent of cohabitation has made weakness in the Presidency more easily noticeable. In effect, a cohabitative government is a structural manifestation of a weak President who has at least not fully convinced the electorate of the validity of his programme. However, the President is not rendered impotent by cohabitation, and rather than in indictment of the office of the President, a cohabitation represents a constitutional shot off the bows from the electorate. The President has not been robbed of his ability to exercise strong executive power, but he has lost the ability to do so when the public do not endorse his parliamentary party. The system of government as a whole, if not made more balanced by the occurrence of cohabitation has certainly become more constitutionally aware in nature as a result. Increased faith in, and attention to the wording of the Constitution of the Fifth Republic has been a result of cohabitation, and the way in which the constitution has so well risen to the challenge is in itself a factor that has contributed to stability and balance in the French political system. 1 Ministerial staff were instructed by the Prime Minister to refuse telephone calls from the Elys�e, since all contact was to be routed through the Prime Minister's office. ?? ?? ?? ?? ...read more.