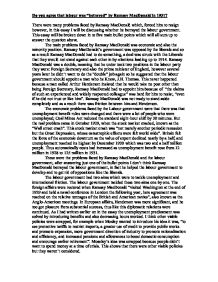 Do you agree that labour was &quot;betrayed&quot; by Ramsay MacDonald in 1931?

Do you agree that labour was "betrayed" by Ramsay MacDonald in 1931? There were many problems faced by Ramsay MacDonald which, forced him to resign however, in this essay I will be discussing whether he betrayed the labour government. This essay will be broken down in to five main bullet points which will all sum up to answer the question above. The main problems faced by Ramsay MacDonald was economic and also the minority position. Ramsay MacDonald's government was opposed by the liberals and so as a result Ramsay MacDonald had to do something, a deal was struck with the Liberals that they would not stand against each other in by-elections leading up to 1914. Ramsay MacDonald was a double, meaning that he under took two positions in the labour party they were: Foreign Secretary and also the prime minister of England, however several years later he didn't want to do the "double" job again so he suggested that the labour government should appoint a man who he Knew, J.H. Thomas. This never happened because a man called Arthur Henderson insisted that he would take no post other than being Foreign Secretary, Ramsay MacDonald had to appoint him because of "the claims of such ...read more.

In European affairs, Henderson was more significant, and he too got pleasure from substantial success, thus like this diplomatic relations were continued. As I had written earlier on in the essay the unemployment predicament was solved by introducing benefits and also decreasing hours worked. I think other viable policies were scrapped, for example when Mosley wanted to introduce his idea it was, "to see protective tariffs to restrict imports, a greater use of credit to provide public works and promote expansion, more government direction of industry to promote rationalization and efficiency, and increased pensions and allowances to boost domestic consumption and encourage earlier retirement". Moseley's idea was scrapped because people didn't want to spend money at a time of crisis. This shows that there were other viable policies but they weren't considered. Taking in to account that other policies were viable and the aims of the labour government I still believe that Ramsay MacDonald didn't betray labour because he tackled the problems faced and also helped Britain establish a consensus with other countries such as America. Ramsay MacDonald had his personal responsibility towards economic strategy, he told everyone his strategy of socialism as a visionary faith, and he said this in a speech against Moseley who wanted the labour government to use his idea of spending more money. ...read more.