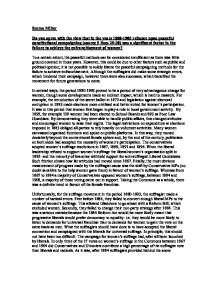 Do you agree with the view that in the years 1880-1903 reliance upon peaceful constitutional campaigning (source 5 lines 29-30) was a significant factor in the failure to achieve the enfranchisement of women?

Emma Miller Do you agree with the view that in the years 1880-1903 reliance upon peaceful constitutional campaigning (source 5 lines 29-30) was a significant factor in the failure to achieve the enfranchisement of women? To a certain extent, the peaceful methods can be considered insufficient as there was little ground covered in those years. However, this could be due to other factors such as public and political opinion; it is not possible to solely blame the peaceful campaigning methods for the failure to achieve enfranchisement. Although the suffragists did make some strategic errors, which hindered their campaign, however there were also successes, which benefited the movement for future generations to come. In several ways, the period 1880-1903 proved to be a period of very advantageous change for women, though some developments made an indirect impact, which is hard to measure. For example, the introduction of the secret ballot in 1872 and legislation against electoral corruption in 1883 made elections more civilised and better suited for women's participation. ...read more.

This was a serious mistake because the 1884 Reform Act would be more likely meant that progressive liberals would prefer democracy to equality- i.e. they would be more likely to listen to demands for universal franchise than to demands for women to gain the vote on the same basis as men. What the suffragists should have done is to have accepted the liberal connection and campaigned with the liberals for universal suffrage. In principle, this should not have been too difficult. The campaign for women's suffrage had, after all been launched by liberals. In only three of the 17 votes on women's suffrage in the Commons between 1867 and 1904 did Conservatives and Unionists contribute a high percentage of the suffragist vote than liberals and radicals. As it was, after 1884 suffragists provided behind the scene resistance against proposals for universal suffrage and insisted that women should get the vote before any further extension of the male franchise took place. The suffragists tactical conservatism helps to explain why several mid-Victorian radicals-such as John Bright and Joseph Chamberlain did not support the suffragists. ...read more.

Finally, of course the liberals feared that if they gave women the vote it would help the conservatives win office. However, these suggestions could be considered excuses rather explanations. As we have seen previously, the liberals were ambivalent about women's suffrage and effused to promote it as a party policy. Constantly, and with consummate skill, the government undermined the efforts of the advocates of women's suffrage. The following catalogue of failed bills tends to support this argument. The catalogue of failed bills tends to support this argument: In 1906, the government refused to support and amendment to a Plural Voting Bill that would have enfranchised a number of propertied women. In 1910, the First Conciliation Bill carried but ultimately failed because the Government refused to grant it Parliamentary time. In 1911, the Second Conciliation Bill carried but Asquith announced that he preferred to support manhood suffrage. In conclusion I believe that the years 1880-1903 although weren't successful in achieving enfranchisement they did lay the foundations for development of the women's suffrage movement and gain more support from women and men all around the country and brought the issue to the attention of parliament which is a starting point and is considered an achievement in itself. ...read more.