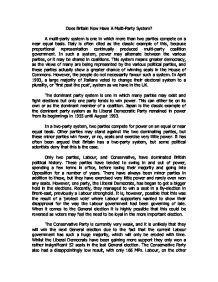 Does Britain Now Have A Multi-PartySystem?

Does Britain Now Have A Multi-Party System? A multi-party system is one in which more than two parties compete on a near equal basis. Italy is often cited as the classic example of this, because proportional representation continually produced multi-party coalition government. In such a system, power may alternate between the various parties, or it may be shared in coalitions. This system means greater democracy, as the views of many are being represented by the various political parties, and these parties actually show a greater chance of winning seats in the House of Commons. However, the people do not necessarily favour such a system. In April 1993, a large majority of Italians voted to change their electoral system to a plurality, or 'first past the post', system as we have in the UK. ...read more.

These parties have tended to swing in and out of power, spending a few terms in office, before losing their majority and going into Opposition for a number of years. There have always been minor parties in addition to these, but they have exercised very little power and rarely even won any seats. However, one party, the Liberal Democrats, has began to get a bigger hold in the elections. Recently, they managed to win a seat in a By-election in Brent-east, previously a Labour stronghold. It is, however, possible that this was the result of a 'protest vote' where Labour supporters wanted to show their disapproval for the way the Labour government had been governing of late. When it comes to the General election it is highly possible that this could be reversed as voters may feel the need to be loyal in the more important election. ...read more.

However there are a number of reasons contributing to a growing dissatisfaction with the Labour government. Weapons of mass destruction have still not been found in Iraq, and despite the findings of the Hutton report, a great number of people still blame Tony Blair for the death of Dr. David Kelly. It must also be remembered that voter apathy is becoming a problem, and owing to this unexpected results could occur in the election. In the future, it is probable that British politics will move towards a multi-party system. This would become more likely if proportional representation were to be introduced. This would most definitely be of advantage to smaller parties whose support is not concentrated like that of more dominant parties. It is unlikely that such a system will be introduce however, because any government is going to be reluctant to destroy the very electoral system which brought it into power in the first place. ...read more.