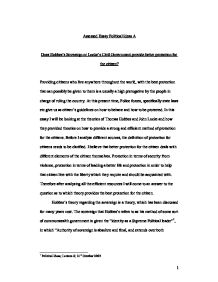 Does Hobbes's Sovereign or Locke's Civil Government provide better protection for the citizen?

Assessed Essay Political Ideas A Does Hobbes's Sovereign or Locke's Civil Government provide better protection for the citizen? Providing citizens who live anywhere throughout the world, with the best protection that can possibly be given to them is a usually a high prerogative by the people in charge of ruling the country. At this present time, Police forces, specifically state laws etc give us as citizen's guidelines on how to behave and how to be protected. In this essay I will be looking at the theories of Thomas Hobbes and John Locke and how they provided theories on how to provide a strong and efficient method of protection for the citizens. Before I analyse different sources, the definition of protection for citizens needs to be clarified. I believe that better protection for the citizen deals with different elements of the citizen themselves. Protection in terms of security from violence, protection in terms of leading a better life and protection in order to help that citizen live with the liberty which they require and should be acquainted with. Therefore after analysing all the efficient resources I will come to an answer to the question as to which theory provides the best protection for the citizen. Hobbes's theory regarding the sovereign is a theory, which has been discussed for many years now. The sovereign that Hobbes's refers to as his method of some sort of commonwealth government is given the "identity as a Supreme Political leader"1, in which "Authority of sovereign is absolute and final, and extends over both ecclesiastical and civil concerns"2. ...read more.

The way, in which this is linked into how well the sovereign protects the citizen, is that it can be seen that by creating a sovereign the citizen will be protected for as long as it can be protected. Therefore, God and the political superior will keep the citizen protected until the citizen does not feel obliged to live to the sovereign laws anymore. Whereas Hobbes believes in a sovereign state in which everyone has an obligation to abide and follow the rules, John Locke's theory is based on the pursuing of a civil government, which Hobbes did not believe could happen. There are many reasons why Locke didn't believe that a sovereign was needed in order for a state to be run correctly, efficiently and even more so a state which could protect its citizens better than if it was run in another way. Locke thought that if everyone was willing to give up all their rights to have a government to look after them without taking advantage and being rational towards them then a government without anarchy could be achieved. One of Locke's beliefs was that each individual has a right to execute a law of nature. In order for them to be run under a civil government they needed to pass that right to the commonwealth, and then to get rid of the state of nature, an official umpire of sorts in needed to look at the state of nature, and determine what goes and what doesn't. ...read more.

laws which are already implemented some inside the heart and some from God. Then the citizen will be protected by the civil government aswell as being able to use its own mind because everyone has natural laws inside them, it's just the fact that sometimes the freedom isn't there to express and use it. Overall in conclusion to the question of does Hobbes's sovereign or Locke's civil government provide better protection for the citizen, based on the evidence I would propose that Locke's theory of civil government provides better protection for the citizen. The reason to why I have reached this conclusion is due to a number of factors. Locke allows the citizen to use natural law to a much larger extent than Hobbes and the fact that Locke has moved away from the state of nature and towards a government, which looks after the people in a more direct manner unlike an Anarchist government shows that stability can be achieved when society is given time to gel together. However although I agree that Locke's civil government provides a better protection for the citizen as a whole, I believe that Hobbes also provides suitable protection to the citizens in his society too under the circumstances, which was given to him. Although Hobbes's period of time was one during the civil war, the laws and the issues surrounding the sovereign made it possible to see that Hobbes was trying to provide instant protection to the citizen individually rather than collectively as a society as a whole. This was due to the fact that in a state of war, sometimes the best method of protection is just plain and simply self-preservation. ...read more.