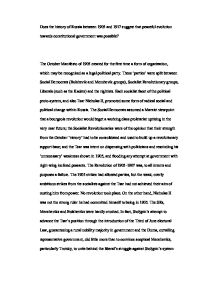 Does the history of Russia between 1905 and 1917 suggest that peaceful evolution towards constitutional government was possible?

Does the history of Russia between 1905 and 1917 suggest that peaceful evolution towards constitutional government was possible? The October Manifesto of 1905 created for the first time a form of organization, which may be recognised as a legal political party. These 'parties' were split between Social Democrats (Bolshevik and Menshevik groups), Socialist Revolutionary groups, Liberals (such as the Kadets) and the rightists. Each socialist facet of the political proto-system, and also Tsar Nicholas II, promoted some form of radical social and political change within Russia. The Social Democrats assumed a Marxist viewpoint that a bourgeois revolution would beget a working class proletariat uprising in the very near future; the Socialist Revolutionaries were of the opinion that their strength from the October 'victory' had to be consolidated and used to build up a revolutionary support base; and the Tsar was intent on dispensing with politicians and rescinding his 'unnecessary' weakness shown in 1905, and flooding any attempt at government with right-wing inclined peasants. The Revolution of 1905-1907 was, to all intents and purposes a failure. The 1905 strikes had allowed parties, but the weak, overly ambitious strikes from the socialists against the Tsar had not achieved their aim of ousting him from power. No revolution took place. On the other hand, Nicholas II was not the strong ruler he had committed himself to being in 1905. ...read more.

This had the consequence of bringing Stolypin to rely on these as upholders of agrarian noble privilege. This is important when one considers that if Stolypin had continued to work with the Octobrists, and not insisted on the passing of the unconstitutional Western Zemstvo Bill in violation of the Fundamental Laws, that the centrist claims for a representational democracy could have soon been realised if the Tsar could have been pressured to abdicate. Stolypin's course of action, however, sealed the polarisation of the liberal forces in the Duma. By the time the Fourth Duma was elected, it held a restricted franchise and was dominated by men of property and privilege. This left the opposition floundering and fractious. Industrial strife exploded after February 1912 as living costs rose exponentially faster than wages. By 1914, the political and economic situation looked menacing. Was this inevitable? It is quite obvious that the spread of Marxist ideology through the early 1900s was becoming stronger and swifter. Recurring poor harvests and a quickly growing, but poorly funded and under fed, urban sector stood testament to this. To this extent, the action of Stolypin to promote the growth of a 'kulak' class in the rural areas was the only hope that the Tsar had for his survival. Equally, the passing of the Fundamental Laws were necessary to balance the October Manifesto's creation of a political voice, which was, in turn, the only reasonable solution to quelling anti-tsarist trends. ...read more.

A government consensus under the conditions presented to Russia was impossible. Exacerbated tensions were inevitable, The Tsar's position was inevitably fixed, the Tsar's control was inevitably doomed to fail, lack of control inevitably begets a search for control. This is not to say constitutional government was impossible. It was, for a time, the desired option by all parties, including the Bolsheviks. However, it is fairly certain that it could not have come into being without a purge of political tensions, certainly not peacefully, and evolutionary only in the most broad sense of the word. Lenin, by 1920, saw the only solution to Russia's problems as a 'proletariat dictatorship', maybe, by then he was right, the constitutional democratic boat had sailed, the constitutional government had failed in its apathy and lack of formal control. The end of Tsarism left a power vacuum which was ideologically refused by so many groups which had become too far entrenched in their ideology that it was only by the Civil War that they realised ideology had to be compromised for a greater good. In effect, the factious groups of the Duma: the conservative rightist liberals, Mensheviks, Bolsheviks, SRs; became so static in their ideology that it was impossible to evolve any sort of system, at least not without a free solo reign, and it was inevitable that one group had to pursue this aim. ...read more.