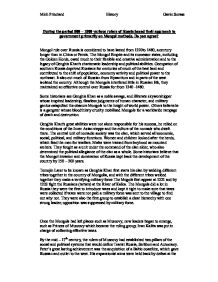 During the period 800 - 1800 various rulers of Russia based their approach to government primarily on Mongol methods. Do you agree?

During the period 800 - 1800 various rulers of Russia based their approach to government primarily on Mongol methods. Do you agree? Mongol rule over Russia is considered to have lasted from 1220to 1480, a century longer than in China or Persia. The Mongol Empire and its successor states, including the Golden Horde, owed much to their flexible and creative administration and to the legacy of Genghis Khan's charismatic leadership and political abilities. Occupation of southern Russia deprived Russians for centuries of much of the best land and contributed to the shift of population, economy activity and political power to the northeast. It also cut much of Russian from Byzantium and in parts of the west isolated the country. Although the Mongols interfered little in Russian life, they maintained an effective control over Russia for from 1240 -1480. ...read more.

Some historians believe that the Mongol invasion and domination of Russia kept back the development of the country by 150 - 200 years. Temojin Later to be known as Genghis Khan first starts his clan by welding different tribes together in the country of Mongolia, and with the different tribes welded together they make a terrifying military force The Mogols first appear at 1221 and by 1223 fight the Russians (tartars) at the River of Kalka. The Mongols did a lot in Russia they were the first to introduce taxes and kept it tight to make sure that taxes were collected if taxes were not paid a military force was sent to the village to find out why not. They were also the first group to establish a clear hierarchy with one strong leader; opposition was suppressed by military force. ...read more.

After 1700, he increased army number, tightened discipline all of which are big characteristics of the way in which the Mongols used, so this is an indication to what kind of impact the Mongols had Russia. I think it is fair to say the Mongol occupation of Russia had a big impact on the way that Russia was governed for a long time after they had disappeared. The way that the Mongols governed was the first of its kind and was a very effective way to govern. With one strong leader telling people what to do and them carrying it out. Taxes were set out and gathered efficiently, they also set up a clear line of communication which had to travel hundreds of miles. The methods used by the Mongols can be clearly seen during the reign of Peter the Great and also Ivan the terrible and Catherine the Great. Minh Pritchard History Gavin Scrase ...read more.