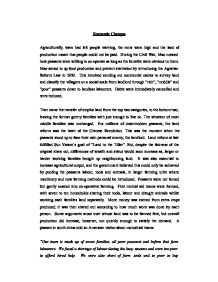 Economic Changes after the 1949 Communist Revolution in China

Economic Changes Agriculturally, wars had left people starving, the rents were high and the lack of production meant that people could not be paid. During the Civil War, Mao noticed how peasants were willing to co-operate as long as the benefits were obvious to them. Mao aimed to up food production and prevent starvation by introducing the Agrarian Reform Law in 1950. This involved sending out communist cadres to survey land and classify the villagers on a social scale from landlord through "rich", "middle" and "poor" peasants down to landless labourers. Debts were immediately cancelled and rents reduced. Then came the transfer of surplus land from the top two categories, to the bottom two; leaving the former gentry families with just enough to live on. The situation of most middle families was unchanged. For millions of downtrodden peasants, the land reform was the heart of the Chinese Revolution. This was the moment when the peasants stood up to face their own personal enemy, the landlord. Land reform at last fulfilled Sun Yatsen's goal of "Land to the Tiller". But, despite the fairness of the original share out, differences of wealth and status would soon increase as, larger or harder working families bought up neighbouring land. It was also essential to increase agricultural output, and the government believed this could only be achieved by pooling the peasants labour, tools and animals, in larger farming units where machinery and new farming methods could be introduced. Peasants were not forced but gently coaxed into co-operative farming. First mutual aid teams were formed, with seven to ten households sharing their tools, labour and draught animals whilst working each families land separately. More money was earned from extra crops produced; it was then shared out according to how much work was done by each person. Some arguments arose over whose land was to be farmed first, but overall production did increase, however, not quickly enough to satisfy the demand. ...read more.

In 1958 the total actually increased to 200 million tons. At the time however, it was officially proclaimed that the crop had been 260 million tons. The exaggerated estimate led to dining halls in some communes to offer very generous meals, and use up most of their food stocks before the 1959 harvest came in". None of this would have mattered if the harvest in 1959 had been a good one. But the weather in 1959 was very bad. In some parts of china there were floods, in other parts there was drought. The result was a harvest of only 170 million tonnes. Before long, people were going hungry. Some began to starve. To complete the farming crisis, the weather in 1960 was even worse than in 1959. The bad weather, combined with the failure of the great leap forward, reduced the harvest to 144 million tonnes. This led to a major famine, killing around 9 million people in 1960 alone. The government introduced a rationing system under which people were given a maximum of 125 grams of grain a day, but the death toll continued to raise. Between 1959 and 1962 some 20 million Chinese died of starvation and relate diseases. This period was known as the 'Three bitter years'. Mao's Great Leap Forward proved to be a disaster for the Chinese. It so crippled the economy, that the people of China avoided famine only because of the government's strict and efficient rationing system. The failure of the Great Leap Forward brought stinging criticism from Nikita Khrushchev in 1960. Mao, in turn, criticized Khrushchev as a coward, and a capitalist. Khrushchev then cut off all economic and military aid. The rupture between the two governments would never heal. The world now had two separate communist superpowers pursuing radically different courses; the immediate effect, however, of the split was to isolate China internationally, for it now had no friends in the world. ...read more.

The two five year plans did not have his desired effect, but it did manage to boost the economy and morale. The failure of the great leap forward had something to do with the bad weather but as Liu Shaoqi said later that the disaster was "30% the fault of nature, and 70% human error". In the country it seemed maybe the communists would reform but Mao went over the top to introduce socialist values and resulted in leaving a country in possibly more ruin than when he had came to power. Before Mao many had died because of war. He managed to destroy the faith and hope of millions, many of which died from lack of organization at harvest time and generally throughout the year. He had not done much to help the peasants and their situation, he gave them land then took it away from them, in some cases their living conditions had become worse. Even the Red Guard, when they finally reached the rural areas, realised that while they thought their lives in the city were bad, that it was nothing compared to the hardship endured by those in the country. Song Mingchao, a red guard remembers "Chairman Mao said we were supposed to learn from the peasants, but the peasants didn't want anything to do with us. We couldn't understand their accents anyway. They thought we were lazy. They blamed us for eating all their food without earning it." The Red guards were not used to hard labour. Song tells us: "We were always hungry. We scrounged in the fields, looking for sweet potatoes, roots, herbs, whatever we could find." During Mao's reign no one gained anything, the peasants gained land then lost it, many people lost their lives. The educated, were stripped of their riches, their wisdom was ignored. As soon as a new leader emerged all the old values and ways were changed and the old china of Mao was left behind. ...read more.