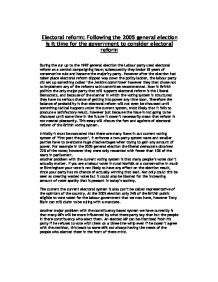 Electoral reform: Following the 2005 general election is it time for the government to consider electoral reform During the run up to the 1997 general election the Labour party used electoral reform as a central campaigning issue; subsequently they broke 18 years of conservative rule and became the majority party. However after the election had taken place electoral reform slipped way down the policy ladder, the labour party did set up something called 'the Jenkins committee' however they then chose not to implement any of the reforms said committee recommended. Now in British politics the only major party that still supports electoral reform is the Liberal Democrats, and because of the manner in which the voting system is structured they have no serious chance of getting into power any time soon. Therefore the balance of probability is that electoral reform will not even be discussed until something radical happens under the current system, most likely that it fails to produce a satisfactory result, however just because the issue is not going to be discussed until some time in the future it doesn't necessarily mean that reform is not needed pleasantly. ...read more.

The current the current electoral system is also can't be called representative of the opinions of the country. At the 2005 election only 24% of the British public eligible to vote voted for the labour government that we now have, however Tony Blain can still claim to be ruling with a mandate. Another major problem with the constituency based system we have currently is that many MPs will be more influenced by what there party say than but the people in there constituency who elect them. An elected MP can be dismissed from his party if he refuses to vote with them on a three line whip even if he doesn't agree with the decision, this leads to some MPs not always having the needs of the people who elected them in the front of there mind. Another factor that should be taken into account is that electoral reform has been approved by a government body; the Jenkins commission that the labour party set up concluded that reforms should happen in the electoral system, the people in the committee are probably ...read more.

Some might view this as a good thing since the government are often more educated in the affairs of state than the public and therefore should be able to do things the public don't like, however others might claim that since the government rules with a mandate form the public the soul priority of the government should be to do what the electorate demand. In the end however I feel the most convincing argument against electoral reform is the fact that our current system works, and is continuing to put the party who gained the highest proportion of votes into power with a decent majority, and many people would say that until the current system fails we should not seek to sabotage it through passing reforms for the sake of improving the possession of the smaller parties. My personal opinion is that a strong government is better for the country than a 'fair' one, electoral reform will be forced to come about when it is necessary and probably not before. ...read more.