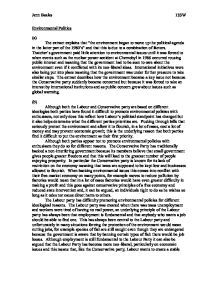 Environmental Politics (a) The extract explains that "the environment began to move up the political agenda in the latter part of the 1980's" and that this is due to a combination of factors. Thatcher's government paid little attention to environmental issues until it was forced to when events such as the nuclear power accident at Chernobyl in 1986 occurred rousing public interest and meaning that the government had to be seen to care about the environment even if it conflicted with its neo-liberal ideas. International initiatives were also being put into place meaning that the government was under further pressure to take similar steps. The extract describes how the environment became a key issue not because the Conservative party suddenly became concerned but because it was forced to take an interest by international institutions and as public concern grew about issues such as global warming. (b) Although both the Labour and Conservative party are based on different ideologies both parties have found it difficult to promote environmental policies with enthusiasm, not only does this reflect how Labour's political standpoint has changed but it also helps determine what the different parties priorities are. Pushing through bills that seriously protect the environment and allow it to flourish, in a lot of cases, cost a lot of money and may prevent economic growth; this is the underlying reason that both parties find it difficult to put the environment as their first priority. ...read more.

win power they would make changes that would effect the individual; this is why both parties will structure their campaigns around issues such as the NHS and education rather than the environment. It can also be argued that for both parties environmental issues are out of their hands anyway. Institutions such as the EU and treaties such as the Kyoto agreement mean that the country is under constant pressure to improve its environmental status. Although the parties may not passionately support environmental policies when one is put before them they usually accept unless it will have a huge impact, this is unlike in the US where the President refused to sign the Kyoto agreement. (c) Most people would probably describe themselves as "green" yet it is possible to distinguish people further using the categories of "light green" and "dark green". James Lovelock put forward the idea that earth is a single, self-regulating organism and that any species which upset the earth's harmony could be wiped out; "dark green" thinkers tend to believe that humans should interfere with nature as little as possible and that all species have just as many rights as humans. Most people fit into the "light green" category which has more moderate ideas and does not demand huge social and political changes, "light green" thinkers agree that there are problems with the environment but that the way to solve them is through pragmatic and small changes. ...read more.

therefore governments should be concentrating on matters closer to home such as health and education rather than the state of the environment. Although none of the main parties would agree to having this view it does seem that they have not put the environment as a priority, the Blair government has repeatedly failed to meet its targets of pollution reduction and although there have been some small bills passed through on the whole the Government seems to be extremely far from a "dark green" way of thinking. Although the link between fox-hunting and the environment is not solid, the debate surrounding fox-hunting did raise the question of whether or not animals have rights. The ban on fox-hunting caused uproar in the countryside, the government was seen as interfering and hunters have vowed to disobey the law and continue hunting anyway - this implies that if "dark green" ideas were to be implemented they would probably not be accepted by the public anyway or would need an extremely authoritarian government to enforce them. "Dark green" ideas will not work with just one country's involvement and require countries to combine forces and work together this simply does not seem possible at the moment and is partly responsible as to why "modern governments are more likely to accept 'light green' than 'dark green' ideas". ?? ?? ?? ?? Jenn Beales 13SW ...read more.