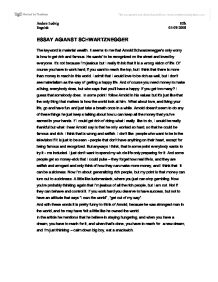 ESSAY AGIANST SCHWARTZNEGGER The keyword is material wealth. It seems to me that Arnold Schwarzenegger's only worry is how to get rich and famous. He wants' to be recognized on the street and loved by everyone. It's not because I'm jealous but I really think that it is a wrong vision of life. Of course you have to work hard, if you want to reach the top, but I think that there is more than money to reach in this world. I admit that I would love to be rich as well, but I don't see materialism as the way of getting a happy life. And of course you need money to make a living, everybody does, but who says that you'll have a happy if you get too many? ...read more.

I don't like people who want to be in the television if it is just to be seen - people that don't have anything on their heart, except for being famous and recognized. But anyways I think, that in some point everybody wants to try it - me included. I just don't want to spend my whole life only preparing for it. And some people get so money-sick that I could puke - they forget how real life is, and they are selfish and arrogant and only think of how they can make more money, and I think that it can be a sickness. Now I'm about generalizing rich people, but my point is that money can turn out to a sickness. ...read more.

But he is great, I like him - I don't think he is the best actor but he sure has muscles. It's funny he is willing to work so hard, and destroy his body with all the steroids' that he has been taken. You can without doubt say that he has fulfilled his American dream. He came from Australia and knew what he wanted, and he really got it - and afterwards he became the governor of California. I like the whole idea of the American dream - in particular that each individual should have an equal chance for success. Of course they do - and it won't be depended on if you're born rich or poor, small or tall. I would like to go over there, for sometime, in the future and see if it really is like it's said. ?? ?? ?? ?? Anders Ludvig H2h Engelsk 05-09-2008 ...read more.