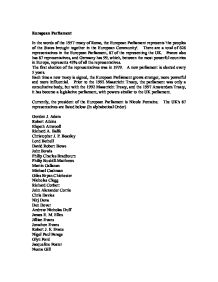 The third week in the month is set aside for meetings of the political groups, and the forth week is set aside for the plenary sitting in Strasbourg. The secretariat, described earlier, is located in Luxembourg. The Secretariat The organisation of parliament's work is all done y a secretariat. This 'organisation' is headed by a 'Secretary-General' and approximately 3,500 permanent staff working below him/her. As well as this, there are staff for each political group, and member's assistants. About a third of these people work in the translation and interpretation service of parliament, because of the 11 different languages used in parliament. Money Surprisingly, although parliament is extremely large, with all their members, and the number of people in the secretariat, parliament still has only a small budget in Europe. They have a budget of only 1% of the whole E.U. budget, which equates to approximately �1 from every person living in the E.U. What the European Parliament Does The European Parliament's work depends largely on it's powers. These powers have grown since it was first conceived, mainly in the recent treaties of Rome and Amsterdam, as mentioned earlier. ...read more.

Parliament has the power to censure the commission, which motion would inevitably force the commission to resign. So far, a motion to censure the commission has never been adopted, which would mean that two thirds of the parliament would have to be in agreement to do it. In march 1999 however, the European Parliament issued a report on the commission's management. This report note, wasn't carried out by parliament, it mandated a committee of 'independent experts' to carry out this work. It resulted the commission resigning, in order to prevent the embarrassment of a formal censure of parliament. Every day, parliament exercises it's powers: it studies monthly and annual reports which the commission is obliged to hand over. These include reports such as it's the annual general report, and the monthly report on the implementation of the budget. Finally, the commission has a 'question time' in which the European Parliament can provide written or verbal questions. Over 5,000 questions are asked each year. Parliament and the Council Parliament's powers over the council have increased dramatically since the expanded budgetary and legislative powers were introduced. The two share legislative power because of the codecision procedure, which was mentioned previously. ...read more.