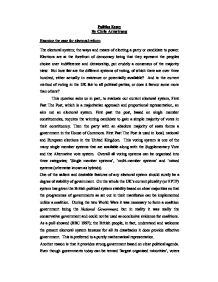 Examine the case for electoral reform.

Politics Essay By Chris Armstrong Examine the case for electoral reform The electoral system; the ways and means of electing a party or candidate to power. Elections are at the forefront of democracy being that they represent the peoples choice over indifference and dictatorship, put crudely a consensus of the majority view. But how fair are the different systems of voting, of which there are over three hundred, either actually in existence or potentially available? And is the current method of voting in the UK fair to all political parties, or does it favour some more than others? This question asks us in part, to evaluate our current electoral system, First Past The Post, which is a majoritarian approach and proportional representation, an aim not an electoral system. First past the post, based on single member constituencies, requires the winning candidate to gain a simple majority of votes in their constituency. Then the party with an absolute majority of seats forms a government in the House of Commons. First Past The Post is used in local, national and European elections in the United Kingdom. This voting system is one of the many single member systems that are available along with the Supplementary Vote and the Alternative vote system. Overall all voting systems can be organised into three categories; 'Single member systems', 'multi-member systems' and 'mixed systems (otherwise known as hybrids). ...read more.

Also it could well be said that adversarial politics is simply a reflection of the volatile mood of the electorate who prefer the alternative policies offered rather than a fudging, compromising amalgam of them. The main alternative offered by the opponents of the present system is some form of proportional representation (PR). The most popular versions, Single Transferable Vote (STV), the Alternative Vote (AV), the Additional Member System (AMS) and its variation favoured by the Hansard society Commision (HSC). While they differ in the mechanics and degree or proportionality they usually advocate their case by emphasising the following points: Representative fairness; the List System is the only once which will give a pure correlation between votes cast and seats won but since it discounts the element of the MP's personality and worth and puts a premium on representation by party, it is usually ignored by PR proponents. The other forms will not give a true representation but they a certainly better in this regard than the present system. Women, ethnic minorities and other minority groups will have a much more likely chance of being elected. Next is the Constituency relationship, is the single-member constituent relationship really so wonderful? Did Finchley's forty nine percent non-Conservative voters feel linked to Mrs Thatcher or Sedgefields population to Mr Blair? Since there is no residential qualification for British MP's can it always be said that voters believe in the abiding concern of MP's for their constituents? ...read more.

Apart from the difficulty of defining 'extremism' and the assumption that such views should not be represented in Parliament, it is possible to do so by creating a specific threshold of percentage votes. In Sweden it is four percent and in Germany is five. As a member of a European Community where most member states practise some form of PR, should not Britain come into sync? It is ludicrous that Britain should be the only EU country which persists with the plurality system for elections to the European Parliament. If Britain thought PR was apt for the short lived power sharing assembly in N.Ireland in 1973 it should be good enough for the rest of the U.K. In conclusion, the strength of the case for retaining the present system of elections is that it places effectiveness, stability, stronger government above a concept of fairer mathematical representation. Electoral systems should reflect the particular strengths of the country in question. What might be construed as suitable for continental countries with different historical and political traditions, is not likely to be easily drafted onto the British political system. There is little evidence that Britain's many economic and social problems can be laid at the door of 'first past the post' and pre-occupation with electoral reform will simply divert attention away from much more pressing needs. The denial of democratic rights to smaller parties was rejected by the European Court of Human Rights in 1979 when the Liberal Democrats presented their case. ...read more.