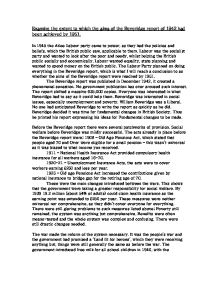 Examine the extent to which the aims of the Beveridge report of 1942 had been achieved by 1951.

Examine the extent to which the aims of the Beveridge report of 1942 had been achieved by 1951. In 1945 the Atlee Labour party came to power, as they had the policies and beliefs, which the British public saw, applicable to them. Labour was the socialist party and wanted to look after the poor and needy, whilst helping the British public socially and economically. Labour wanted equality, state planning and wanted to spend money on the British public. The Labour Party planned on doing everything in the Beveridge report, which is what I will reach a conclusion to as whether the aims of the Beveridge report were reached by 1951. The Beveridge report was published in December 1942, it created a phenomenal sensation. No government publication has ever aroused such interest. The report shifted a massive 635,000 copies. Everyone was interested in what Beveridge had to say as it could help them. Beveridge was interested in social issues, especially unemployment and poverty. William Beveridge was a Liberal. No one had anticipated Beveridge to write the report as quickly as he did. Beveridge decided it was time for fundamental changes in British Society. Thus he printed his report expressing his ideas for Fundamental changes to be made. ...read more.

The Beveridge reports main aim was to demolish the 'Five Giants'; Want, Disease, Ignorance, Squalor and Idleness. His scheme rested on three assumptions; that a NHS would be set up to ensure adequate health care, family/ child allowances would be paid to all parents and that there would be full employment with as little as 3% unemployment. With Beveridge wanting to eliminate poverty he saw it best done by an insurance scheme were every worker would make flat rate contributions, with an ability to claim a uniform rate of benefit. This was similar to the insurance schemes already in place, but Beveridge planned on exceeding the scheme. With insurance contributions there would be one standard weekly payment. Furthermore, Beveridge's scheme would not be selective, but universal. He wanted everyone to be at liberty to take out private insurance as an addition to the state scheme. With such plans, elimination of the means test would take place, as benefits were now entitlements. With all of the above hopefully working Beveridge aimed on mass unemployment removed with Want also abolished. Beveridge believed benefits should be at a substantial level to cover people's basic needs. As a possible result of the Beveridge report, Labour introduced acts, which were suggested by the report. Labour came into power in 1945 with a great public following. ...read more.

The NHS finally came into effect in 1948. By this time Clement Atlee's productive stage was over. Beveridge's report did help, although, Beveridge didn't write a blueprint for the report, it was ideas to conquer the ills of society. Thus, the Beveridge report was ideas not practicality. Labour did on the other hand introduce Acts, which were suggested by Beveridge to help reform the welfare state. Consequently, the distribution of wealth, showed relatively little change between 1945 and 1951. In 1946 'houses of the villa type' were being built in the Development Areas, to cater for managers, skilled workers, and scientists, which defeats the object of the Beveridge report to improve housing for a universal and comprehensive change. It is claimed that Bevan was persuaded to agree. Additionally, class divisions continued to pursue as the private sector in key areas of the social services remained forceful - public schools, private insurance schemes, private medical and specialist services. In addition, it was notorious that more affluent or middle-class people received substantial help from universal welfare benefits. Especially with free health service, free secondary-school places and food subsidies. This enabled the gap between them and manual workers to grow even wider. This led Britain's welfare democracy into a more classless society. I thus believe that Labour didn't do everything within their power to fulfil everything which Beveridge stated; however, they did make a great change which led to such success nowadays. ...read more.