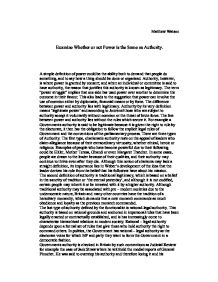 Examine Whether or not Power is the Same as Authority.

Matthew Watson Examine Whether or not Power is the Same as Authority. A simple definition of power could be the ability both to demand that people do something, and to say how a thing should be done or organised. Authority, however, is where power is granted by consent; and when an individual or committee is said to have authority, the reason that justifies this authority is known as legitimacy. The term "power struggle" implies that one side has used power over another to determine the outcome in their favour. This also leads to the suggestion that power can involve the use of coercion either by diplomatic, financial means or by force. The difference between power and authority lies with legitimacy. Authority by its very definition means 'legitimate power' and according to Jouvenel those who are subject to authority accept it voluntarily without coercion or the threat of brute force. The line between power and authority lies without the rules which secure it. For example a Governments authority is said to be legitimate because it is given the right to rule by the electorate, it then has the obligation to follow the explicit legal rules of Government and the conventions of the parliamentary process. ...read more.

Although traditional authority may be associated with pre - modern societies due to the undemocratic nature, Britain and many other countries have the tradition of a hereditary monarchy, which demands that a new monarch commands as much obedience and loyalty as the previous monarch commanded. The last type of authority defined by the functionalist is rational-legal authority. This authority is based on rational grounds and anchored in impersonal rules that have been legally enacted or contractually established, and is has increasingly come to characterise hierarchical relations in modern society. Rational - legal authority depends upon a formal set of rules that give those who hold authority the right to command others. In politics, the Government has rational - legal authority as the electorate votes for which MP and party they want to form the Government in a democratic fashion. Governments authority is checked in Britain by such conventions as Judicial Review for example the case of Jack Straw where he withheld the medial reports of General Pinochet. ...read more.

For example in the midst of a riot the police have the authority to act but are powerless against a mob. Also, John Major was said to have lost many votes in cabinet and was unable to enforce his authority even though he still had authority as Prime Minister. He was viewed as a weak Prime Minister in comparison to Margaret Thatcher who always asserted her authority. In conclusion power implies the ability to enforce will where authority implies legitimacy and the consent to exercise power in the form of parliament being able to "make or unmake any law". The source of authority are rules which confer legitimacy therefore the 'peace process' in northern Ireland is creating such rules by which legitimate authority can be created in the province. Power can also give rise to authority if the body exerting the power becomes universally recognized and accepted. With power being a constituent factor in authority without it authority would decline. Power then without authority, without the legitimate right to rule and without consent can give rise to tension, civil war for example Afghanistan and to a lesser degree Pakistan. ?? ?? ?? ?? ...read more.